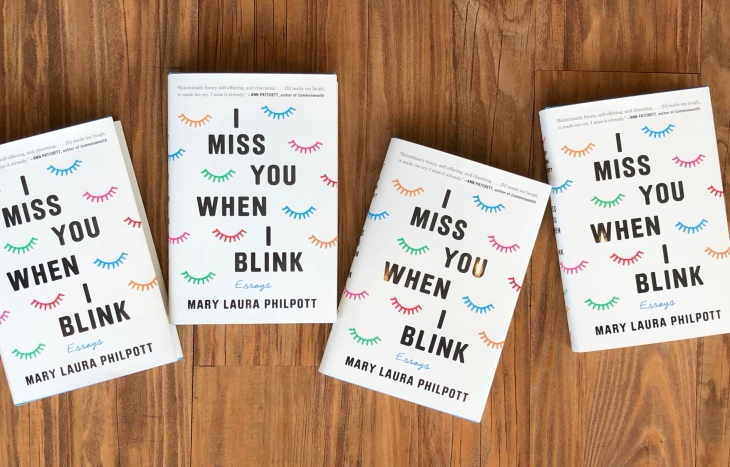 Mary Laura Philpott is not only the creator of Musing, she’s the person who conducts most of the author interviews we feature on the site. So what happens when the soon-to-be-best-selling-essayist (that’s a lot of dashes) has a book of her own? We figured it would be a little awkward for her to interview herself.

That’s where I come in. It’s about time I had a job around here anyway. Mary Laura can answer some questions for a change. I hope you’ll join us for more conversation when we celebrate the launch of her new collection, I Miss You When I Blink, on Monday, April 1, at 6:30 p.m. (The book’s officially out everywhere else on April 2.) Until then, here’s a preview.

Ann Patchett: Please map out the progression from a book of cartoon penguins to a deeply felt book of essays about being an A+ perfectionist trying to grab hold of her life. 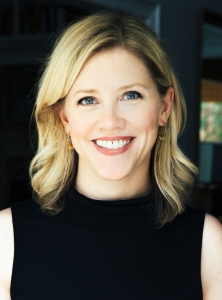 Timing-wise, I Miss You When I Blink grew out of work I’d been doing for years — writing memoir-ish essays — and the penguins popped up along the way as a fun diversion. I sat down to start writing the first new pieces of what would become this book in 2015, right after Penguins came out. Actually, I wrote a very rough draft of the essay called “I’m Sorry, Mindy Kaling” in my New York hotel while I was out promoting Penguins.

AP: Which makes this a good time to ask: what are your life’s obsessions?

MLP: I’m a bit obsessed with the difference between being alone and being lonely. I have felt my loneliest in a crowded room; and I’ve been at my least lonely sometimes when I’m by myself. I love reading and writing about how people reconcile their individual identities with who they are as part of their families and communities. And I love exploring the private rules, bargains, and jokes we make with ourselves inside our own heads — that we think no one else knows about, but then when we talk about them, we realize everyone has.

Time is a biggie, too. One of the hallmarks of my type-A nature is a fixation on getting things done right and on time. Sensing a ticking clock in everything you do helps when you’re taking a test or completing an assignment. But when you’re living — building a career, growing a family, creating art, whatever — being hyper-aware of time can also create anxiety, because the older you get, the more you’re aware of how much time you do (and don’t) have left.

I’m fascinated by how we perceive the passage of time differently at various phases of life. Years don’t feel the same length when you’re 44 as they do when you’re 24 or 14. (I remember talking with both you and George Saunders about this.) How can it be that 30-year-old me, who definitely did exist, does not exist now? Right-now-me grew from 30-year-old me, but she’s gone. She’s over. Gah! It seems like we could solve so much of our existential angst if we could just figure out how to build a time machine and visit different points in our lives instead of being stuck in this linear progression of time. Wouldn’t that be cool?

AP: Well, now I want to apologize for that hourglass I gave you when you were first starting this book. What a load of pressure that must have been to watch the sand slipping away!

MLP: Never apologize for that hourglass! I love that hourglass. And it has extra magic because before you passed it to me, Elizabeth Alexander passed it to you. (If anyone reading this has not read The Light of the World, please remedy that now.) So when I watch the blue sand trickling through the glass, not only is it mesmerizing, but I feel like you’re both there telling me to stop wasting time on Twitter and concentrate. Like a more literary and breakable version of the pants in The Sisterhood of the Traveling Pants.

AP: One of the (many) wonderful things about writing is that you can file pieces of yourself on the page and so you really can go back and visit yourself again, which brings me to my next question: the essays in Happy Marriage came out one at a time and I never had any hesitations about people reading them, but when I gathered them all together I felt hugely exposed. I spent a long time thinking I couldn’t publish that book. Did you find the whole more terrifying than the sum of its parts?

MLP:  I agree 100%. Publishing one essay at a time feels far less vulnerable than publishing a bunch at once. It’s like rolling up a sleeve to show an arm, and then lifting up a hem to show an ankle… but if you show all your parts at once, you’re naked. I struggled with that more last year as I was polishing the final draft than I do now. I think the long timespan between when a book is finished and when it actually lands on shelves plays a tremendously important part in a writer’s psychological health. Booksellers and other early readers have been reading it, and I don’t feel all that exposed anymore.

I did get surprisingly emotional a few months ago, the night before the cover was revealed online for the first time, and I know those tears weren’t about the cover (I love the cover!). It was just hitting me that night that I had to let the book go out into the world where anything could happen to it. I want it to go out there and find its people and be received thoughtfully, and I know I can’t control any of that.

AP: I agree. Time heals the nervousness, plus at some point you say, okay, I’m doing this, and then it all settles down. Do you have a favorite essay? An essay you’d save first if the book was on fire? I also wonder how you feel about people grazing around, reading an essay from the middle then an essay from the end. It completely freaks me out when people tell me they’re reading around in my essay book. I put a lot of thought into the order, people! You’re supposed to start at the beginning. Maybe that’s just me being a novelist.

MLP: Amen. You get so much more out of any collection — essays, poems, songs on a mixtape — when you go in order. The arrangement of Happy Marriage is a perfect example of that! And the essays in I Miss You When I Blink function a bit like chapters in a memoir, in that there’s a narrative arc to the whole thing. You could read any one of them on its own and it would make sense, but they’re arranged to tell a bigger story. (My editor and I debated calling it a memoir instead of an essay collection. Ultimately we went with “Essays” for the subtitle on the cover, but the inside flap calls it a “memoir in essays.” In the Australian and UK editions, they took “Essays” off the cover and are calling it a memoir. So I guess either works!)

If I had to save two in a fire — which I could do because they’re short, so I could put one in each hand — I might save the title essay and the one called “A Letter to the Type A Person in Distress.” But I’d rather prevent the fire in the first place.

I feel like this book is so tightly bound to the bookstore, and to your understanding that readers needed a book about a life crisis that didn’t result in hiking the Pacific Crest Trail. Most of us just have our life crisis in the privacy of our home, and we’re sorely underrepresented in literature. In return for your seeing that and writing the book that will fill the giant hole in the shelves of bookstores everywhere, you’re receiving a tidal wave of bookseller love. I Miss You When I Blink has been named the number one Indie Next pick for April, which is a HUGE honor voted on by booksellers everywhere. It’s like they’re all shouting, “Thank you, Mary Laura! We love you and we love this book and we’re going to sell it to everyone!”

MLP: Oh holy moly, I’m shouting THANK YOU right back. (Actually, I’m saying it at a respectable volume so as not to disturb fellow readers, but I’m also quietly jumping up and down and waving my hands around with extreme enthusiasm.) My editor sent me a document with the notes booksellers sent in after reading early copies of the book, and I’m still speechless. The ways in which people responded to the book are so personal. I don’t think I’ve fully processed them all yet.

If there’s something I could tell other writers to make the publication process seem a little less scary, it would be this: As you slingshot your book out into the world, it’s being caught by booksellers who take great joy in putting the right book into every person’s hands. Knowing that kept me going during the times when I thought I could never finish this thing. Bookstores take care of readers, and they take care of books, and as both a reader and a writer I couldn’t be more grateful.

Join author Mary Laura Philpott, in conversation with Ann Patchett
as we celebrate the publication of I Miss You When I Blink
Monday, April 1, 2019
6:30 p.m. at Parnassus Books
This event is open to the public and free to attend!