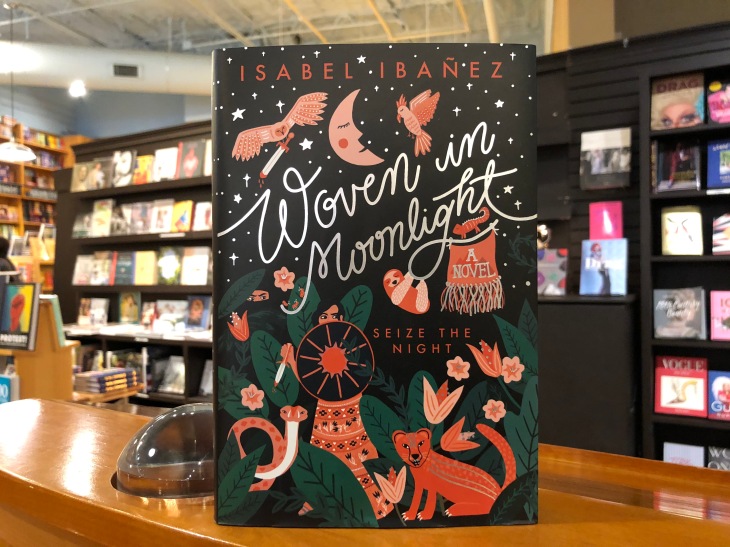 We are thrilled to kick off 2020 with an action-packed fantasy for ParnassusNext members! The January selection for our monthly YA subscription box is Woven in Moonlight by Isabel Ibañez. This #ownvoices YA fantasy draws inspiration from real events in Bolivian history — Ibañez is the daughter of two Bolivian immigrants — while spinning a fantastic tale all its own.

Protaganist Ximena serves as a stand-in for the queen, who is the last of her line. The queen’s people, the Illustrians, lost everything when Atoc used the power of an ancient relic to drive them from their city. With her ability to spin real thread from moonlight, Ximena can weave hidden messages into tapestries for the resistance. And when Atoc demands the queen’s hand in marriage, Ximena must go in her place — providing the perfect opportunity for her to infiltrate the usurper’s stronghold and recover the relic. But then things get complicated.

Court intrigue, a masked vigilante, and a case of hidden identity make it a compelling read. You’ll want to read the story of romance and revolution in turns slowly (to make it last) and quickly (to find out how it ends)!

In the following excerpt, Ximena appears before the people of the kingdom as the queen’s double.

My banged-up spoon scrapes the bottom of a barrel that should’ve held enough dried beans to last for three more months.

There has to be more.

Sickness churns my stomach, and my knuckles brush against bare wood as I coax a handful of shriveled beans into a half-empty bag. I wipe dirty hands against my white trousers and ignore the sweat dripping down my neck. The kingdom of Inkasisa is in the middle of her stifling wet season. Even though it’s night, there’s no escaping the muggy heat.

“Something wrong, Condesa?” asks the next person in line waiting for their ration.

Yes, in fact. We’re all going to starve. Not that I can say this out loud. It goes against everything I know to do as their leader: A condesa should never show fear.

I school my features into what I hope is a pleasant expression, then turn to face the long line of Illustrians waiting for their evening portions. Drawn faces stare back at me. White clothes hang off gaunt frames, loose and big like the tents the Illustrians sleep in next to the keep.

My whole life, I’ve trained for situations like this: manage expectations, soothe people’s worries, feed them. It’s the condesa’s job.

We’re standing in the round storage building with the door propped open, allowing for people to crowd around as I sort through the provisions. Luna’s light casts rectangular patterns on the dozens of empty barrels piled on their sides, while a rickety wooden staircase leads up to the armory housing swords, shields, and bundled arrows. All we could carry when we fled for our lives the day La Ciudad Blanca fell.

What would Ana, our general, want me to say? Manage them. You’re in charge. Don’t forget what’s at stake. We need to survive until we can take back the throne.

I glance at the door, half expecting to find Ana’s broad shoulders leaning against the frame, moonlight reflecting off the silver wisps in her hair. But she’s not there. Ana left four days ago on a mission to chase a rumor about Atoc, the false Llacsan king — a rumor that guarantees our victory.

She promised to be back by yesterday.

An arm brushes against mine. Catalina, silently reminding me of her presence. The knot in my chest unwinds slightly. I forgot she was standing behind me, ever helpful.

“Bring me the wheat, por favor.” I gesture toward the wall the barrels of rations are lined against. “And the cloth bags over on that shelf.”

She obeys, grabbing the supplies off the shelf first and handing them to me, her dark eyes lowered. Then she darts toward the barrel. 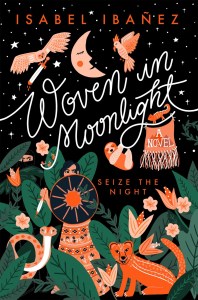 I hesitate; the lie waiting on the tip of my tongue tastes sour and wrong. My gaze returns to the dwindling piles of food at my feet: husked corn, a half-filled bag of rice, and an almost empty basket of bread. Not nearly enough.

A lie won’t feed all these people.

Next to me Catalina stiffens, pausing in her attempt to drag the wheat barrel to my side. Normally it takes the effort of two people, but somehow she manages by herself. Which means this barrel isn’t full either.

The woman’s mouth drops open. “No beans? ¿No hay comida?”

“That’s not what I said.” I force my smile to remain in place as I come to a split decision — our best and only option. “We have to be careful with what we have. So here’s what’s going to happen: Starting immediately, everyone will receive less than half their usual ration, per family. I know it’s not ideal, but it’s either that or we starve,” I say bluntly. “Your pick.”

Another woman shouts, “How can there be no food left?”

A headache presses against my temple. “We do have some food—”

But the woman’s words travel down the line, catching fire in the dark, until fifty people clamor for attention, wanting answers, wanting their rations. They wave their empty baskets in the air. Their loud cries boom like thunder in my ears. I want to duck for cover. But if I don’t do something, I’m going to have a full-blown riot on my hands.

“I can’t offer what we don’t have,” I whisper. Catalina shoots me a meaningful look. A condesa should know how to maintain control of any situation. “I’m doing my job. You do yours.”

The people’s cries swell, bouncing off the walls and threatening to strike me down. “¡Comida! ¡Comida!” The crowd stomps their feet and pushes in, hot breath brushing against my face like heavy smoke. I fight the impulse to step back.

Someone in the crowd yells for El Lobo, and I tense, hoping no one else sings that stupid vigilante’s praises. Every time something goes wrong, someone inevitably brings up the man in the mask. The trickster.

“He steals from Atoc’s coffers all the time—”

“He’s the hero of Inkasisa—”

Oh, for goodness sake. He’s a man in a ridiculous mask. Even my niñera could prank that puffed-up idiotic pretend king. And she was eighty the last time I saw her.

“We want El Lobo!” someone shouts.

“That’s enough!” My voice rings out, sharp like the edge of a blade. “No one speaks his name in my presence, understood? He’s a scoundrel who plays pranks on the false king. That kind of reckless behavior could get us killed. The vigilante is dangerous and not one of us.”

Excerpted from Woven in Moonlight by Isabel Ibañez. Copyright © 2020 Isabel Ibañez. Excerpted by permission of Page Street Publishing. All rights reserved. No part of this excerpt may be reproduced or used, in any for or by any means, electronic or mechanical, without permission in writing from the publisher.

is the book subscription box for YA lovers. Every member of ParnassusNext receives a first edition hardcover of each month’s selected book, signed by the author. There is no membership fee to join — and no line to stand in for the autograph. Not only will you have one of the best YA books of the month when it comes out, you’ll have it straight from the author’s hands, with an original, authentic signature! Set up a subscription for yourself or buy a gift membership for your favorite YA reader for 3, 6, or 12 months.

Previous selections include critically acclaimed titles like The Downstairs Girl (read an interview with author Stacey Lee here), Thirteen Doorways, Wolves Behind Them All, The Field Guide to the North American Teenager, Enchantée, and Wilder Girls, all of which were included on NPR’s 2019 year-end best books list. ParnassusNext selections The Fountains of Silence and Thirteen Doorways were also selected as New York Times best books of the year.