And I could only have seen her there on the stone bridge, a dancer wreathed in ghostly blue, because that was the way they would have taken her back when I was young, back when the Virginia earth was still red as brick and red with life, and though there were other bridges spanning the river Goose, they would have bound her and brought her across this one, because this was the bridge that fed into the turnpike that twisted its way through the green hills and down the valley before bending in one direction, and that direction was south.

I had always avoided that bridge, for it was stained with the remembrance of the mothers, uncles, and cousins gone Natchez-way. But knowing now the awesome power of memory, how it can open a blue door from one world to another, how it can move us from mountains to meadows, from green woods to fields caked in snow, knowing now that memory can fold the land like cloth, and knowing, too, how I had pushed my memory of her into the “down there” of my mind, how I forgot, but did not forget, I know now that this story, this Conduction, had to begin there on that fantastic bridge between the land of the living and the land of the lost.

And she was patting juba on the bridge, an earthen jar on her head, a great mist rising from the river below nipping at her bare heels, which pounded the cobblestones, causing her necklace of shells to shake. The earthen jar did not move; it seemed almost a part of her, so that no matter her high knees, no matter her dips and bends, her splaying arms, the jar stayed fixed on her head like a crown. And seeing this incredible feat, I knew that the woman patting juba, wreathed in ghostly blue, was my mother.

No one else saw her—not Maynard, who was then in the back of the new Millennium chaise, not the fancy girl who held him rapt with her wiles, and, most strange, not the horse, though I had been told that horses had a nose for things that stray out from other worlds and stumble into ours. No, only I saw her from the driver’s seat of the chaise, and she was just as they’d described her, just as they’d said she’d been in the olden days when she would leap into a circle of all my people—Aunt Emma, Young P, Honas, and Uncle John—and they would clap, pound their chests, and slap their knees, urging her on in double time, and she would stomp the dirt floor hard, as if crushing a crawling thing under her heel, and bend at the hips and bow, then twist and wind her bent knees in union with her hands, the earthen jar still on her head. My mother was the best dancer at Lockless, that is what they told me, and I remembered this because she’d gifted me with none of it, but more I remembered because it was dancing that brought her to the attention of my father, and thus had brought me to be. And more than that, I remembered because I remembered everything—everything, it seemed, except her.

It was autumn, now, the season when the races came south. That afternoon Maynard had scored on a long-shot thoroughbred, and thought this might, at last, win the esteem of Virginia Quality he sought. But when he made the circuit around the great town square, leaning back, way back in the chaise and grinning large, the men of society turned their back to him and puffed on their cigars. There were no salutes. He was what he would always be—Maynard the Goof, Maynard the Lame, Maynard the Fool, the rotten apple who’d fallen many miles from the tree. He fumed and had me drive to the old house at the edge of our town, Starfall, where he purchased himself a night with a fancy, and had the bright notion to bring her back to the big house at Lockless, and, most fatefully, in a sudden bout of shame, insisted on leaving the back way out of town, down Dumb Silk Road, until it connected to that old turnpike, which led us back to the bank of the river Goose.

A cold steady rain fell as I drove, the water dripping down from the brim of my hat, puddling on my trousers. I could hear Maynard in the back, with all his games, putting his carnal boasts upon the fancy. I was pushing the horse as hard as I could, because all I wanted was to be home and free of Maynard’s voice, though I could never, in this life, be free of him. Maynard who held my chain. Maynard, my brother who was made my master. And I was trying all I could to not hear, searching for distraction—memories of corn-shucking or young games of blind man’s bluff. What I remember is how those distractions never came, but instead there was a sudden silence, erasing not just Maynard’s voice, but all the small sounds of the world around. And now, peering into the pigeonhole of my mind, what I found were remembrances of the lost—men holding strong on watch-night, and women taking their last tour of the apple orchards, spinsters remanding their own gardens to others, old codgers cursing the great house of Lockless. Legions of the lost, brought across that baleful bridge, legions embodied in my dancing mother.

I yanked at the reins but it was too late. We barreled right through and what happened next shook forever my sense of a cosmic order. But I was there and saw it happen, and have since seen a great many things that expose the ends of our knowledge and how much more lies beyond it.

The road beneath the wheels disappeared, and the whole of the bridge fell away, and for a moment I felt myself floating on, or maybe in, the blue light. And it was warm there, and I remember that brief warmth because just as suddenly as I floated out, I was in the water, under the water, and even as I tell you this now, I feel myself back there again, in the icy bite of that river Goose, the water rushing into me, and that particular burning agony that comes only to the drowning.

There is no sensation like drowning, because the feeling is not merely the agony, but a bewilderment at so alien a circumstance. The mind believes that there should be air, since there is always air to be had, and the urge to breathe is such a matter of instinct that it requires a kind of focus to belay the order. Had I leapt from the bridge myself, I could have accounted for my new situation. Had I even fallen over the side, I would have understood, if only because this would have been imaginable. But it was as though I had been shoved out of a window right into the depths of the river. There was no warning. I kept trying to breathe. I remember crying out for breath and more I remember the agony of the answer, the agony of water rushing into me, and how I answered that agony by heaving, which only invited more water.

But somehow I steadied my thoughts, somehow I came to understand that all my thrashing could only but hasten my demise. And with that accomplished, I noted that there was light in one direction and darkness in another and deduced that the dark was the depths and the light was not. I whipped my legs behind me, and stretched out my arms toward the light, pulling the water until, at last, coughing, retching, I surfaced.

And when I came up, breaking through dark water, and into the diorama of the world—storm clouds hung by unseen thread, a red sun pinned low against them, and beneath that sun, hills dusted with grass—I looked back at the stone bridge, which must have been, my God, a half mile away.

The bridge seemed to be almost racing away from me, because the current pulled me along and when I angled myself to swim toward the shore it was that current still, or perhaps some unseen eddy beneath, pulling me downriver. There was no sign of the woman whose time Maynard had so thoughtlessly purchased. But whatever thoughts I had on her behalf were broken by Maynard making himself known, as he had so often, with hue and cry, determined to go out of this world in the selfsame manner that he’d passed through it. He was close by, pulled by the same current. He thrashed in the waves, yelled, treaded a bit, and then disappeared under, only to reappear again seconds later, yelling, half treading, thrashing.

There I was, my own life dangling over the black pit, and now being called to save another. I had, on many occasions, tried to teach Maynard to swim, and he took to this instruction as he took to all instruction, careless and remiss at the labor, then sore and bigoted when this negligence bore no fruit. I can now say that slavery murdered him, that slavery made a child of him, and now, dropped into a world where slavery held no sway, Maynard was dead the minute he touched water. I had always been his protection. It was I, only by good humor, and debasement, that had kept Charles Lee from shooting him; and it was I, with special appeal to our father, who’d kept him countless times from wrath; and it was I who clothed him every morning; and I who put him to bed every night; and it was I who now was tired, in both body and soul; and it was I, out there, wrestling against the pull of the current, against the fantastic events that had deposited me there, and now wrestling with the demand that I, once again, save another, when I could not even conjure the energy to save myself.

“Help me!” he yelled again, and then he cried out, “Please!” He said it like the child he always was, begging. And I noted, however uncharitably, even there in the Goose facing my own death, that I had never before recalled him speaking in a manner that reflected the true nature of our positions. 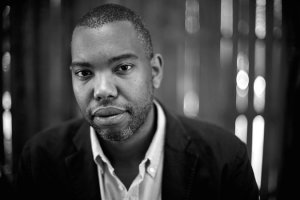 Ta-Nehisi Coates is the author of The Beautiful Struggle, We Were Eight Years in Power, and Between the World and Me, which won the National Book Award in 2015. He is the recipient of a MacArthur Fellowship. Ta-Nehisi lives in New York City with his wife and son. The Water Dancer is his first novel.

See Ta-Nehisi Coates at a Salon@615 event on Wednesday, Nov. 6, at Tennessee Performing Arts Center. Coates will be in conversation with Nashville poet Tiana Clark. More information and tickets are available here.