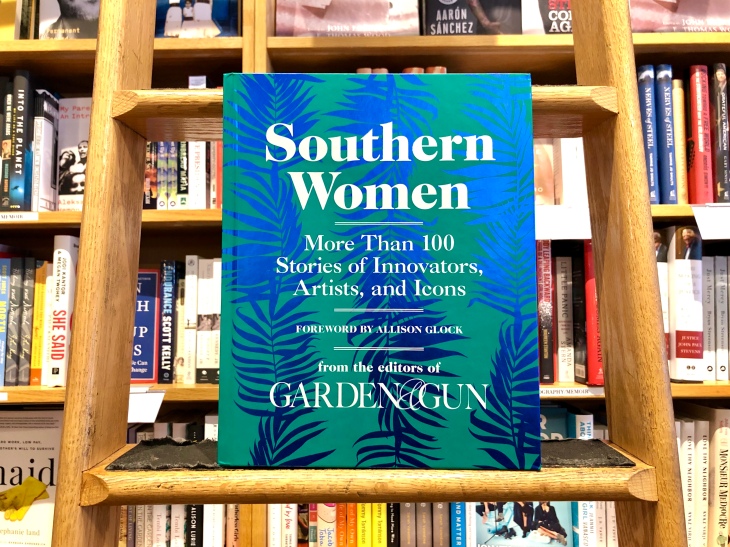 To all those who resolve annually to get their holiday shopping wrapped up early, good news: This might be the year you finally nail it. Your winning strategy? Give everyone on your list a copy of Southern Women, the gorgeous new book from the editors of Garden & Gun magazine. Featuring more than 100 actors, chefs, musicians, writers, businesswomen, and activists who have played a hand in making the contemporary South what it is today, the collection includes plenty of notable Tennesseans, including Loretta Lynn, Reese Witherspoon, Amanda Shires, Dolly Parton, Carla Hall, and lots more.

The magazine has sought since its founding to paint a nuanced portrait of Southerners, shining a spotlight on women in particular — and all the ways they defy the “Southern belle” stereotype. With more fascinating and talented subjects than they could possibly highlight in each issue, the editors knew it was time to envision something bigger on the topic of Southern womanhood.

Amanda Heckert — deputy editor of the magazine and editor of Southern Women — offers a peek into the book’s pages on Musing today. Here, she shares with author Mary Laura Philpott (who interviewed both Lee Smith and Dorothy Allison for the book) some of her favorite behind-the-scenes moments from the project.

Nathalie Dupree
“Nathalie is a Southern culinary legend, and a hoot. She just published her 15th cookbook this month, and over the years she also taught literally thousands of people through her classes at Rich’s Cooking School in Atlanta. Now she lives in Charleston, and we photographed her at her home here, which is chock full of — you guessed it — cookbooks, along with beautiful dishware and art. So we knew we had to have fun with some food props, including this collard bouquet fit for a queen. Garden & Gun’s visuals and photography director, Maggie Brett Kennedy, oversaw the photography for the book, and so the images throughout are just super stunning and varied in style. But they all have that aesthetic that, really, Maggie built — she’s been with the magazine before it even had a name. As a sidenote, one of my favorite quotes in the book came from Nathalie’s interview. She said, ‘If one pork chop is in a pan, it goes dry. If two or more are in a pan, the fat from one feeds the other. So there’s always room to move over for another woman.’ ”

Maya Freelon
“Maya is an amazing artist, and this is one of my favorite photo shoots we did for the book. She works primarily with tissue paper, creating these massive installations that have appeared in museums such as the Smithsonian. After years away, she moved back to her hometown of Durham, North Carolina, and we photographed her on the Vanhook Family Farm in nearby Hillsborough. Later, she told us the significance of the farm: It had been black-owned and -operated for more than 52 years, and she said that when she first stepped foot on it a few years ago, she felt as if the earth said, ‘This is your land, this is your home.’ In her interview for the book, Maya talks more about why she moved back to North Carolina, about how her grandmother, in particular, inspired her artwork.”

Ashley Fliehr
“So, you may not recognize Ashley without her spangles and spandex, but she is known to wrestling fans the world over as the WWE wrestler Charlotte Flair, and she’s carrying on the family tradition — she’s the daughter of the iconic wrestler Ric Flair. Garden & Gun contributing editor Allison Glock interviewed her for the book — Allison had previously written a terrific profile of Ashley for ESPN the Magazine, so they had a great rapport — and I loved hearing about Ashley’s childhood in the hometown that inspired her stage name, Charlotte, North Carolina. In fact, after learning those stories, we decided to photograph her at her childhood home, which had since been sold, but the homeowners agreed to let us shoot there. Here you see her sitting on a playhouse in the backyard that her father built for her.”

Mary Margaret Pettway
“Mary Margaret is not only a wonderful Gee’s Bend quilter, but she’s so involved in other initiatives in her community of Boykin, Alabama, and beyond. Among other things, she’s an instructor at the Black Belt Treasures Cultural Arts Center, and board chair of the Souls Grown Deep Foundation, which preserves and promotes African American artists in the South. Here, the photographer captured her in Boykin with the stunning quilts on the clothesline, which I loved because in her interview for the book, she talks about how people will drive past if they see them hanging in the yard, and then turn around to creep by again for a picture.”

Dorothy Allison
“I grew up near Greenville, South Carolina, where Dorothy Allison grew up and where set her debut novel Bastard Out of Carolina, and I’ve always admired her and her writing with a bit of wonder and awe. Mary Laura, I think your interview captured so well why I and others feel that way — nearly every quote made my spine tingle. Especially when you asked her what she meant when she said that when she writes, she’s reaching for ‘glory,’ and part of her reply is, ‘Glory does not require approval. Glory is like the angels take over and you’re flying.’ We photographed her at her home, which is not Greenville now, but Guerneville — California — in front of her books, which, I mean, #bookcasegoals.”

Gina Chavez
“Gina is an incredible singer-songwriter from Austin, Texas, and she writes in both Spanish and English. She also has been a cultural ambassador for the U.S. State Department, so she’s traveled the world sharing her Latin folk-pop music and messages of inclusion. The photographer Wynn Myers captured Gina for us in Austin at Jennifer’s Gardens, a historic house and garden on Shoal Creek — a location that was as colorful and vibrant as she is. For the book, we asked a lot of the women, ‘What does being a Southern woman mean to you?’ and I thought she had a really interesting answer. She said, ‘Honestly, when I think about being Southern, I think of all the ways that I don’t identify with that word. I think of white women in the Bible Belt with big hair and sweet Southern accents. I see the stereotypes I’ve swallowed. That’s what’s so interesting about being a practicing Catholic and a lesbian. Most people look at you like, How? It’s about realizing that it’s possible to be all the things that you are called to be. We’re all multidimensional. We put other people into boxes, and that’s where the stereotypes come in with words like Southern and pride. There’s a part of me that wants to reclaim the word Southern. The South is so open in a lot of ways. There’s open land, open sky, open roads. Why can’t it also mean open-minded? Why can’t it mean open for everyone?’ ”

Willie Anne Wright
“Willie Anne was pitched to us by a Virginia writer named Amanda Dalla Villa Adams, and I knew from her description of Willie and her accomplishments that I had to get her in the book. Willie Anne is a talented artist who also pioneered color-Cibachrome-pinhole photography back in the 1970s — among other things and people, she often photographed women at pools. Willie Anne is in her mid-90s now, and through her interview with Amanda she shared so much wisdom about Southern womanhood and being an artist. We decided to photograph her at her home in Richmond; the photographer used four-by-five black and white film for this shot, and then worked with alternative printing for this really cool double-exposure effect — a fitting way to capture a photographer’s portrait.”

Learn more about the book here, find out where and when you can catch the Southern Women book tour around the South this fall, then get your copy from Parnassus!