Remember last year, when Ann Patchett dropped news that she was trying her hand at writing a children’s picture book? The time has come for readers to see the result! Ann’s book, a collaboration with Fancy Nancy illustrator Robin Preiss Glasser, debuts next week. We can’t wait for you to have a look at Lambslide.

What’s the book about? Voting… kind of. When young Nicolette Farmer runs for class president at school, the lambs on her family farm overhear talk of “winning by a landslide,” but what the lambs hear is “lambslide.” Adorable antics ensue.

Ann Patchett and Robin Preiss Glasser will join readers at Parnassus Monday, May 6, 2019, at 4:30 p.m. in the store for a fun event with a book signing afterwards. Meanwhile, Patchett answered a few questions from children’s book critic Julie Danielson about Lambslide. Here’s their exchange, courtesy of Chapter 16:

Julie Danielson: What sparked this narrative? Did you hear a malapropism, by chance, and a story was born? 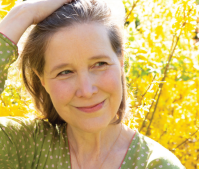 Ann Patchett: I started writing children’s books about a year ago after meeting Robin Preiss Glasser, and for a while it seemed like everything I saw sparked an idea. Lambslide was probably the fourth or fifth one I wrote. (They aren’t coming out in any particular order.) I was reading The New York Times the morning after Conor Lamb won the 17th congressional district of Pennsylvania, and someone was holding a poster that said “LAMBSLIDE” on it. I was only amazed that a hundred other picture book authors didn’t jump to the same conclusion.

JD: I like how the lambs democratically campaign (with President Nicolette’s wise guidance) for what they want. Since an election is a significant plot point, do you hope for the story to be an introduction to activism for children?

AP: I don’t know that the book is a call for activism as much as it is a call to check in with the people around you and try to figure out if the thing you want matches up with the thing they want. I think it’s a story about learning to be a thoughtful member of a group.

I also know I was fascinated with voting when I was little. It seemed like the ultimate glamorous adult activity. I love the idea of children thinking about voting early on. This would be a great place for parents and children to start having a conversation about voting, not just in terms of our government, but in a family, in a school, in a group of friends. A question as simple as “How many of you want pizza?” can be the root of voting. I may want Thai food, but if the group votes for pizza, we’re going to eat pizza.

JD: What are some details Robin Preiss Glasser added to the story that make you happy to see?

AP: Robin is a tremendous collaborator. Every single thing I know about children’s books I learned from Robin. She figured out how to make the slide. I was thinking of something entirely whimsical, but she took the tarp off the hay bales and made it into a slide. I was floored by that. She keeps just the right balance of imagination (lambs are talking and voting) and practicality (lambs could slide down the hill on a tarp and have fun). Also, she gave my dog Sparky a cameo on every page. Sparky is a lead character in some of the later Farmer books. The fact that he’s embedded into the story line of this book thrills me.

JD: Which children’s books from your own childhood most resonated with you?

AP: I loved Dare Wright’s The Lonely Doll, which is about as strange as a picture book can get. I bought a first edition at Powell’s years ago for my sister, and I don’t think anything has ever thrilled her more. Those black-and-white photographs of Edith and Mr. Bear and Little Bear are hard to forget. My sister also loved Der Struwwelpeter by Heinrich Hoffman, a book as dark as midnight. I was three-and-a-half years younger than Heather, so I pretty much followed her lead. I loved [Maurice] Sendak’s Nutshell Library, both for its brilliance and its tininess. I’m still singing the Carole King songs that went with those books.

JD: As one of the most prominent faces of the independent bookstore movement, can you talk about what role children’s books have in driving traffic to the store?

AP: Before Karen Hayes and I opened Parnassus, I remember Daniel Goldin at Boswell’s Books in Milwaukee saying to me, “If you want customers, you have to raise them yourself.” That’s the truth. Having a great children’s department, having a great story time, having booksellers that are specifically trained as children’s booksellers—these make all the difference. I love knowing that there’s a whole generation of kids growing up with Parnassus, making their happy associations with books right there in our store.

Before we opened, I knew plenty of people who wrote for adults, but I didn’t know any children’s book authors. If I can make a ridiculous generalization, children’s authors are the nicest people in the world. Sandy Boynton, Tad Hills, Kate DiCamillo, Mac Barnett, and Jon Klassen. I could go on and on. These people are wildly creative and so smart and just fun. I think I got into picture books because I wanted the chance to hang out with them.

JD: What inspires you these days?

AP: As far as picture books are concerned, pretty much everything inspires me. Certainly Sparky is my muse (he’s sleeping now; being a muse is a huge job), but so many things strike me as funny. I’m working on a book now that comes from a couple lines of Macbeth. It’s not Shakespeare’s funniest play, but I can crack myself up just thinking about the picture book. Come to think of it, my rabid desire to write children’s books probably comes from these distinctly unfunny days. I want to make myself laugh, and I want to make other people laugh.

JD: Do you have any advice for those authors already published in the world of adult literature who want to write children’s books?

AP: When people ask me how they should go about getting their novel published or how to find an agent, I have a general idea of how it’s done. But for children’s books, I have absolutely no idea. People have been wanting me to look at their children’s books for years and give them advice, and I would always say, “That’s like asking me how to get an economics textbook published.” So, I’m a little terrified when I think about all the picture books people are going to want me to look at. I feel like I fell into this whole thing backwards with my eyes closed. I have no idea how I do this thing. I’m going to be a very poor role model.

Julie Danielson, a former school librarian, blogs at Seven Impossible Things Before Breakfast and writes about picture books for Kirkus Reviews, BookPage, and The Horn Book. Her first book, Wild Things! Acts of Mischief in Children’s Literature, was published in 2014.

And don’t miss the Lambslide book release celebration party on Monday, May 6 at 4:30 p.m., when Ann Patchett and Robin Preiss Glasser will join us for a fun event and book signing. This event is open to the public and free to attend — no reservations necessary. (Fine print: In order to join the signing line to have books brought from home signed at this event, you must purchase a copy of Lambslide from Parnassus Books, either in-store, over the phone, or online.)