People like to know how writers become writers, and in my case a big piece of the credit goes to my stepfather, Mike Glasscock, who died on February 17, 2018. He was a famous surgeon and a pioneer in the field of neuro-otology. He had a big life, traveled the world, had three wives and four children. His achievements were spectacular, as were his mistakes. Mike came into my life when I was five, and even though he and my mother parted ways when I was 24, he and I stayed close until the end. Mike’s belief in me was epic. When I was a little kid, and I mean little, eight or nine, he would say, “Someday I’m going to open up a book and it’s going to say, ‘for Mike Glasscock.’” And he was right. I dedicated Commonwealth to him. The book was in large part based on him and the lives of the six children he and my mother brought together. The portrait I painted wasn’t always flattering, but Mike said he loved it. He was proud of me, and his constant encouragement and support transcended the madness of family life. Sometimes things work out. 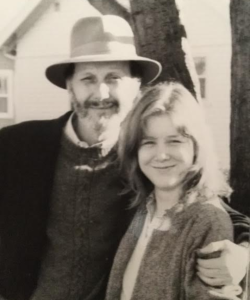 There’s something about the confluence of springtime and death that feels right: life ends and life starts up in an explosion of pink blossoms. I’ve got grief on one shoulder and gratitude on the other, writing a book while losing the person who was most convinced I should be writing books. When Eliot said that April is the cruelest month, he wasn’t taking global warming into account. In 2018, the cruel month is definitely March.

So what’s the reading list for such an occasion? Lucky for me, I’d been reading the right books without knowing how soon I was going to be needing them. 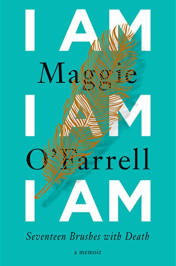 I Am I Am I Am: Seventeen Brushes With Death by Maggie O’Farrell is a marvel. Everyone at Parnassus has been clutching this one to their chests since we first got the galleys. Maggie O’Farrell is either the luckiest or least lucky person around, depending on how you look at it: unlucky because she nearly dies 17 times, and lucky because somehow, miraculously, she manages not to. I beg you to come into the store, sit in a comfortable chair, and read the first chapter. If you aren’t riveted, I’m not exactly sure what will rivet you. The book isn’t just a long collection of freaky mishaps — it’s about how we live, all of us, with the specter of death, and how we manage to forget about it in the course of our ordinary lives. It’s one of those rare books that points out the fragile state of our own mortality while managing to make the reader feel fully, breathlessly alive. It’s a little bit like doing the fast descent on a big roller coaster only to be whipped back up again. Seventeen times. 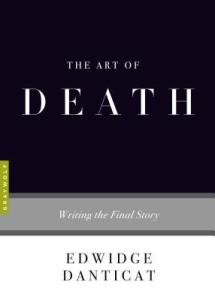 I read Edwidge Danticat’s book, The Art of Death: Writing the Final Story a while ago, but thematically I hadn’t found the perfect post in which to discuss it. Then I did. Edwidge is one of my favorite writers and I would happily read her grocery list. There will never be enough days to adequately praise her memoir Brother, I’m Dying, which tells the story of Haiti, her father, and her uncle. In a sense, The Art of Death — which is part of “The art of…” series published by Graywolf Press — is a sequel, telling the story of her mother’s death, but it’s also more than that. The Art of Death brilliantly examines death in literature and in culture, coming back around to Toni Morrison and Gabriel Garcia-Marquez and Tolstoy to try to put words to the unknowable. It’s a beautiful, thoughtful meditation on death and art and living, but really, that’s the heart of everything Edwidge does.

All six kids, as we call ourselves (my sister and me, our four step-siblings), saw Mike in the last week of his life. When he died, we all reassembled in Asheville, North Carolina, where he lived with my heroic stepsister Tina, for the funeral. Those were jumbled days that were not made for novel writing. 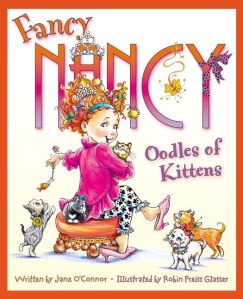 In the middle of it all, I was briefly back in Nashville at Parnassus for an early meeting and got to meet the illustrator Robin Preiss Glasser of Fancy Nancy fame. We had a nice conversation, and then she asked if I would ever consider writing a children’s book for her to illustrate. I told her what I’ve told other people who’ve asked me this question: I don’t know how. Robin picked up a copy of her latest, Fancy Nancy: Oodles of Kittens (a book to snap anyone out of a dark mood) and explained in under two minutes what I would need to do. I went home that night and wrote a book for Robin. Two days later we had a deal. A week later I’d written another one. I have to say it was an incredibly cheerful endeavor, and really nice to have something small to work on while I couldn’t get to the something big I was working on. 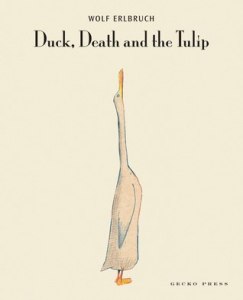 I throw this in here just to say that now that I’m writing picture books myself, I feel confident about recommending one: Duck, Death and the Tulip by Wolf Erlbruch. Fittingly, it was written in German and was later translated and republished in New Zealand. This is not your standard American fare, and whether or not you will want to read it to a child — though of course life will present limitless moments when it will be appropriate — is up to you. Chances are you’ll want a copy for yourself. I first saw it awhile ago on Brainpickings.org, that wonderful website of all things bookish that the brilliant Maria Popova puts together for the betterment of humankind. She doesn’t care when a book was published or where it was published or whether or not it’s out of print. She just shines the light of her formidable attention on it so we’ll be sure to see.

In fact, I just went on the site to find out when her piece about Duck, Death and the Tulip first came out, and there at the opening of her new post was this quote from Toni Morrison’s Nobel acceptance speech, “We die. That may be the meaning of life. But we do language. That may be the measure of our lives.”

And on that note, friends, come to the store to visit. Community, books, and dogs, we’ve got it all.