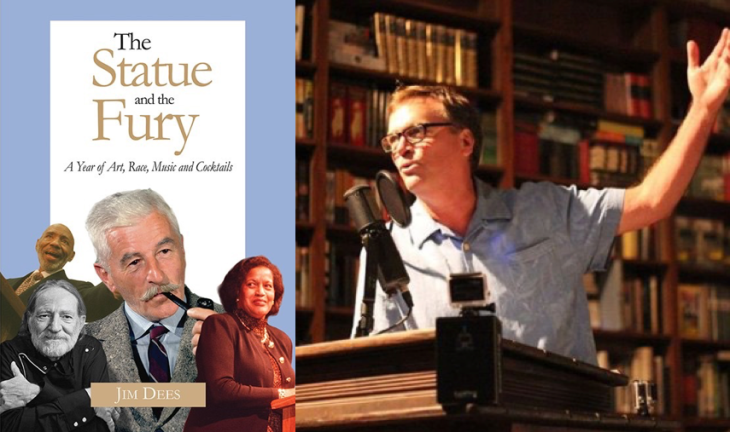 If you’re a book-lover and you’re not keeping tabs on the literary scene in Mississippi, you’re missing out. To change that, let’s start by introducing you to Jim Dees: author, editor, and host of the legendary Thacker Mountain Radio Hour literary and music variety show. Meet him here at Parnassus Books on Friday, September 29, at 5:30 p.m. for a night of literary conversation and entertainment by musical guests including JoJo Hermann of Widespread Panic and more.

Dees will read from and sign his “funny, irreverent, quirky, and true” book, The Statue and the Fury, an award-winning account of one remarkable year of truth-is-almost-wilder-than-fiction events that changed everything in Oxford, Mississippi. The book includes Dees’ interviews with civil rights pioneers James Meredith and Myrlie Evers, late literary icons Shelby Foote and Willie Morris, and even a smoky encounter with Willie Nelson.

Get to know Dees a bit more in this interview, and make plans to join us on the 29th for a rockin’ party celebrating Southern literary and musical traditions.

What was going on in 1997 in Oxford — and was it about all these events that made you think they needed to be brought together in a book?

The series of events in Oxford circa 1997 had all the ingredients of a good read: There was the controversy over a proposed statue of William Faulkner. [The city wanted to build a statue to honor the 100th birthday of the native Nobel laureate.] There were death threats at Ole Miss over the school’s plans to drop all Confederate symbols such as “Dixie” and the Rebel flag. (Sadly, this is now a national issue.) There was “trees versus development” soul-searching going on as Oxford grappled with how to retain its small-town charm while whacking down 100-year-old oak trees to put up condos and malls. And in that same year, 2 Live Crew played Oxford, after which video turned up showing nudity and debauchery. Henry Kissinger also came to visit (full clothed, thankfully). Willie Nelson rolled through town, inviting me onto his famous bus. Interesting characters, issues of life and death, plenty of humor, drama, and poignancy, a little rock and roll. It’s all there.

Why were you the right person to write it?

As a cub reporter (a 40-year-old one, at that), for our local paper, The Oxford Eagle, it was my job to stick my nose into all these events. When the city announced plans for the Faulkner statue, I figured it would be fodder for a column or two. When the mayor and his crony cut down a magnolia tree in front of City Hall for the statue — without approval — the formerly couch-potato public was suddenly jamming city council meetings, shouting and hissing. I knew it could be a book. The characters were just too rich. It helped to have the literary backdrop of Faulkner, whose fictional world is based in Oxford. I started saving all my cassette interviews, notebooks, published pieces, and research books. I felt like a drummer — I had the best seat in the house.

Speaking of books and book-ish things: Thacker Mountain Radio Hour is one of those phenomena people really need to experience to appreciate. But tell us a bit about what makes it so special.

The fact that we feature literature and music sets us apart. There are plenty of musical shows on public radio. There aren’t many that have musical guests and a contemporary author who reads for 10 minutes from their book. Plus, there’s the setting of the show, a remainder bookstore. All the shelves are on rollers so they’re pushed aside, and 150 wooden chairs are set up and the audience gets there early. The warm bodies surrounded by wood — including the books — makes for great sound. The show is live with no do-overs. That’s an undeniable rush.

How important is indie bookstore Square Books to the work you do — and to Oxford itself?

I can remember being intimidated 25 years ago when I walked into Square Books and saw all my favorite writers on the shelves. Then they would bring these writers in for readings, and what a revelation that was. To read a book by one of your favorites — in my case, people like Lewis Nordan, Jim Harrison, or Eudora Welty — then to have an opportunity to have a drink with them and in some cases, become buddies. As a young writer, it was inspiring, even emboldening. Now, all these years later, I’m proud to have my own books on their shelves. The place feels like home.

What do you think would surprise non-Mississippians most about the literary scene in Mississippi?

Probably the fact that there is a literary scene in Mississippi would be surprising to some. In Oxford alone, the sheer number of writers, at least 30 or 40, is surprising. There are three — count ‘em, three — bookstores on the Oxford town square. There is also surprising diversity in Mississippi’s writers for a state perceived to be non-inclusive, from Aimee Nezhukumatathil and Kiese Laymon to Angie Thomas and Jesmyn Ward.

Tell us about the special guests joining you for this event at Parnassus. Who’s coming — and how do you know each other?

The musicians who will play at Parnassus are guys who performed in Oxford back in the 1980s and 1990s, years that have come to be regarded as something of a golden age. Bands like Blue Mountain, Beanland and the Tangents were rocking the local clubs. Writers such as John Grisham, Willie Morris, and Barry Hannah were living in Oxford. Larry Brown was taking writing classes under the late novelist Ellen Douglas; Donna Tartt was in Willie’s class. A young Ace Atkins was discovering his fictional voice.

Back then, JoJo Hermann, before his legendary career with Widespread Panic, was the pianist for Beanland, a ’90s era jam band from Oxford, sort of Panic’s farm team. Cary Hudson, who will also join us for the Parnassus event, fronted Blue Mountain, an alt-country trio in the vein of Flat Duo Jets, Uncle Tupelo, and Wilco. Fish Michie was the piano wizard for The Tangents, a Delta R&B powerhouse group who could go from Ellington to Otis to Beatles on a dime. Barry “Po” Hannah Jr., son of the late great writer, was known as an absolute guitar monster on stage, deceptively laid-back and serene off stage. These guys are true friends of long-standing. You can’t imagine how honored and humbled I am that they’re coming to celebrate with us. It will be great to see them — at least until they rock my face off.

THE STATUE AND THE FURY: A Year of Art, Race, Music and Cocktails