The first book by local author Andrew Maraniss is already a big hit at Parnassus Books this season, and it’s safe to predict it will keep getting bigger — especially after its official launch this Wednesday, November 19, when Nashville Mayor Karl Dean will appear at the bookstore at 6:30 p.m. in conversation with Maraniss.

Strong Inside is the true story of Perry Wallace, the first black basketball player in the Southeastern Conference. Nashville readers will be drawn to the book’s regional subject matter; readers everywhere will appreciate its combination of literary ingredients – humanity, tension, brutally honest reporting, thoughtful storytelling, and, yes, sports. From The Nashville Scene and Chapter 16’s review: “Like any great biography, [it] is about more than just its subject. It is a history of Vanderbilt, of Nashville, of the SEC; a history of basketball and Southern sports culture and how they clashed, time and again, with the forces of civil rights that transformed America in the 1960s.”

Wednesday’s conversation and book-signing event is FREE and open to the public. In anticipation of what promises to be a lively evening, our MUSING editor, Mary Laura Philpott, discussed the book with Maraniss.

Tell me how this project started for you.

AM: In some ways it goes back 25 years, to 1989 when I was 19-year-old sophomore at Vanderbilt. I read a student magazine article about Perry Wallace, and a scene about his first game at Mississippi State captivated me. Just the intensity of the racism he encountered was shocking. I was taking a black history course at the time, and my professor encouraged me to interview Perry (who was then a law professor in Baltimore) and write about him. I ended up writing two papers and several student newspaper articles about him, and we stayed in touch intermittently over the years.

Fast forward to 2006: I’m standing in the kitchen at my future in-laws’ house, eating the great appetizers my mother-in-law always sets out, and I proclaimed that I wanted to write a book but didn’t know what to write about. My father-in-law said, ‘What about Perry Wallace?’ and I said, ‘Yes, that’s it!’ I emailed Perry soon after and he said, ‘Go for it.’ An eight-year journey researching and writing the book was underway.

What was the toughest part of your research for the book? 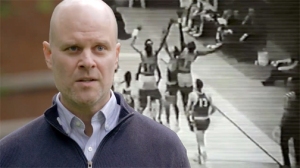 AM: I loved every bit of the research for Strong Inside. For several years, after work I would visit the Vanderbilt special collections and archives, or the downtown public library, and dig through boxes of documents or print out old newspaper articles from microfilm. I interviewed Perry dozens of times and talked to more than 80 other people for the book. I never felt like I was working when I did any of this – it was so much fun to discover little nuggets of new material at the archives or to have someone tell me an interesting anecdote that I knew would be great for the book. The toughest part was just trying to balance my responsibilities at home and at my job with the work I was doing for the book.

Seriously. You’re a partner at public relations firm McNeely Pigott & Fox and busy with a young family. How on earth did you find time to write this?

AM: That’s why it took eight years! There are times now where I sit and stare at the book and wonder how it really happened. Mainly it just came down to making this my sole focus outside of work and family. Any spare minute early in the morning or after the kids went to bed, I spent on the book. My wife, Alison, was very supportive of this. Now that I’m done, I’m waiting for her to suggest that I begin working on another book so she doesn’t have to see so much of me.

Why does this story need telling now?

AM: Well, in one sense whether it is now or it was 20 years ago, Perry Wallace’s story is an amazing one that needs to be told. What if nobody knew the story of Jackie Robinson? Perry is a pioneer of that caliber, and he has lived a fascinating life, enduring and overcoming so much. In terms of “why now” specifically, I’d say for several reasons. Perhaps most important, I think there’s a real need for honest conversations about race. I hope this book can be a springboard for that. People can read about what Perry went through, how he was perceived by blacks and whites, how he was both supported and condemned by both, and maybe they take relate some lessons back to their own day-to-day relationships.

Then, I think people are always looking to read about inspirational people who overcame obstacles, or about people who represented the truth yet were still marginalized. In one way or another, just about everyone should be able to relate to an aspect of Perry Wallace’s life, and learn how he dealt with it. He’s an incredibly brilliant person and that’s reflected throughout the book.

Perry Wallace made history on the basketball court, but this book is about a lot more than just basketball. Talk about why you approached it that way.

AM: I love sports, but I didn’t want to write a superficial sports book. There are chapters dealing with basketball that my fellow Commodore fans will find revealing, and it was a blast writing about Pearl High School’s 1966 state championship victory in the first fully integrated TSSAA tournament, a game that took place on the exact same night as the historic “Glory Road” NCAA title game between Kentucky and Texas Western. But the off-the-court material is the side of the book that I think makes it the most interesting. Having the chance to write about the changes taking place in Nashville and on a college campus in the late 1960s, and placing Perry Wallace’s pioneering journey into the context of civil rights in the South, makes it a book, in my opinion, that will pleasantly surprise people looking to dig into a good story that transports them to another time and place.

What have been some of the most exciting or surprising reactions to Strong Inside so far?

AM: The early reaction to Strong Inside has been gratifying. The book has only existed in my head or on my computer for eight years, so now that it is entering the public realm it’s a whole new experience for me. One of the most unusual and cool reactions came from Nashville Mayor Karl Dean. I was out at a construction site for a groundbreaking and he showed up to speak carrying a copy of my book and a pen, and asked me to sign it. That was so out-of-the-blue it shocked in me in a great way.

Another one that stands out is the email I received from the legendary sports writer and NPR commentator Frank Deford, who had received an advance copy. The fact that he really liked the book legitimized it in my mind, and actually brought me to tears. I felt an enormous amount of responsibility to do justice to this story and write something that would be respected by people like him. I remember sitting at my computer at home reading his email and feeling, for the first time, like I may have accomplished that. Now that the book is out in stores and more and more people are able to read it, I’m really looking forward to hearing from other readers who have no connection to the story.

Your dad is David Maraniss, the Pulitzer Prize winning journalist. Growing up witnessing his work, did you assume you’d do something similar, maybe be a writer when you grew up?

AM: Yes. Growing up around my dad and hanging out with his journalist friends as a kid, I just thought this is what you do. So I wrote something called “AJ’s Sports Journal” magazine when I was 12 or 13, and I was sports editor of my high school paper in Austin, Texas. It was then that I learned about the Fred Russell-Grantland Rice sportswriting scholarship at Vanderbilt. Winning that scholarship has influenced the course of the rest of my life in many ways. For one thing, I never would have heard of Perry Wallace if it weren’t for Mr. Russell and his scholarship bringing me to Nashville. I didn’t remain a writer professionally, and in fact have gone over to the ‘dark side’ of public relations (which I enjoy very much), but in some ways writing this book is a way of contributing to a trade I have admired since I was a kid.

No judgment here. I’ve always felt like being a writer and having a day job on “the dark side” can co-exist, at least for a while. Look at Smith Henderson, for example. I just hope you won’t stop writing. Thank you!

AM: Thanks for doing this Q&A!

Strong Inside: Perry Wallace and the Collision of Race and Sports in the South

Join author Andrew Maraniss and Nashville’s mayor, Karl Dean
Wednesday, November 19, 6:30 PM
Parnassus Books
FREE and open to the public
Not in Nashville? No worries. Anyone, anywhere can shop indie-style online — just click here. If you’d like your copy autographed at no additional cost, simply type “SIGNED” in the notes section at checkout. We’ll personally take care of your order and get it shipped off to you ASAP.