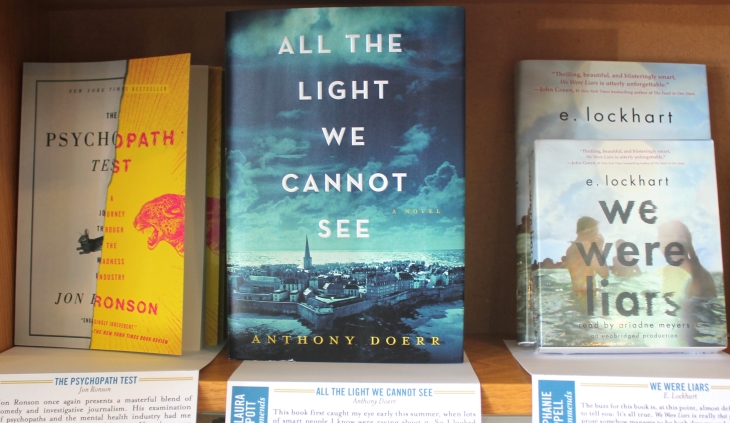 Summer is a great season to be a bibliophile, because it’s considered a totally normal activity to sit in a beach/pool/lawn/whatever chair and plow through books one after the other. (Speaking of which, check out Zadie Smith’s fantastic What It Means to Be Addicted to Reading: “The beach is one of the few places pathological readers can pass undetected among their civilian cousins.”) In addition to Ann’s current favorites, here’s what our staff is reading and loving right now.

By Smith Henderson
My favorite book this year is this amazing debut novel.  Pete Snow is a social worker who is separated from his wife and rarely sees his daughter.  While his life is falling apart, he continues to try to help the lives of others. This is how he encounters Benjamin Pearl, an undernourished, feral eleven-year-old boy who appears to be living in the Montana wilderness.  Pete becomes deeply involved in his life and the life of the boy’s radical fundamentalist Christian father, Jeremiah, whose activities are attracting the interest of the FBI.  While the story and setting are sometimes bleak, the author is a master storyteller and the characters slowly reveal themselves in often surprising ways. – Karen Hayes

A Flag for Sunrise

By Robert Stone
With his gift for high-quality voltage writing, Robert Stone places the reader in the midst of a South American revolution. Stone’s flawed characters always illustrate that human nature is the same, regardless of the circumstances of time or locale. Flag for Sunrise is a literate page-turner that illuminates while it entertains. – Mary Grey James

By Jonathan Miles
We’ve all been there: A victim of forces beyond our control while waiting to take a time-sensitive flight. Every thought you’ve ever had in retaliation for these circumstances is between the pages of this delightful novel. Bennie Ford is trying to get to his estranged daughter’s wedding when his flight is cancelled. Outrage abounds (usually quite humorously) until the long hours of waiting turn into reflection and regret. Take this novel on your next plane trip—particularly if it’s on American Airlines! – Mary Grey James

By Emma Straub
Looking for a summer book with a good story and good writing? Here it is: Teenaged Elsa Emerson of Wisconsin flees a family tragedy in 1929 for Hollywood to make it big in pictures. She becomes Laura Lamont, Oscar-winning star, with two marriages and several movies before her fortunes turn dark … – Kathy Schultenover

By Emma Straub
If you’re looking for the perfect beach read that isn’t fluffy, look no further. Set admist the Post family’s summer trip to Mallorca, Spain, The Vacationers beautifully encompasses the exhilaration, tension, and pleasure that accompany every family vacation. – Niki Coffman

By Frann Preston Gannon
This adorable board book is basically perfect. It’s chock-full of dogs, the rhymes and opposites are fun, and the artwork is fantastic. An A+ gift for any baby you’re buying for. – Niki Coffman

How to Catch a Bogle

By Catherine Jinks, Sarah Watts
I adore Catherine Jink’s use of language and dialect. The middle grade readers I know are SMART; they do not appreciate an author’s talking down to them. Parents will enjoy this trilogy, as well. The second book is due out in January. – Sissy Gardner

By E. Lockhart
The buzz for this book is, at this point, almost defeaning. I’m here to tell you: It’s all true. We Were Liars is really that good. Lockhart’s prose somehow manages to be both dreamy and sharp, and Cady’s voice leaps off the page. There are sentences so good I had to put the book down to compose myself before continuing to read. Seriously, just read this book. I’m not kidding. Do it. And if anyone asks you what it’s about, lie. – Stephanie Appell

Since You’ve Been Gone

By Morgan Matson
When Emily’s best friend Sloane leaves town without a trace, Emily’s plans for their summer together evaporate. Sloane was the exciting, confident, risk-taker, and everyone knows Emily as “that girl who’s always with Sloane.” But when Sloane mails Emily a list of thirteen cryptic tasks, Emily’s summer begins to go in a very unexpected direction. Matson writes some of the most dimensional teen characters out there, and even the bit players here shine. I can’t think of book that better captures the intensity of friendship, or the way one summer can change everything. – Stephanie Appell

By Marie Rutkoski
This is a thoughtful, gripping fantasy informed by the Roman conquest of ancient Greece. Kestral is the daughter of the brilliant general who masterminded the conquest and enslavement of the Herrani people, and Arin is a Heranni slave, purchased by Kestral, whose resentment of his conquerers runs much deeper than anyone knows. This morally complex tale is deftly managed by Rutkoski, who grounds the novel’s political intrigue in her dimensional characters and fluid prose. – Stephanie Appell

The Rise & Fall of Great Powers

By Tom Rachman
For a novel that could easily have fallen into kitsch (after all, it opens with a thirtysomething bookseller in the Welsh countryside), this book miraculously expands into a stirring, adventurous tale of international travel and self discovery. For anyone looking for a fun, thoughtful, mysterious adventure (with the bonus of a remarkable cast of nuanced characters) I cannot recommend this book highly enough. – Yashwina Canter

By J. J. Abrams, Doug Dorst
This book is the coolest experiment going on in publishing. This layered literary mystery, the tale of literature students Eric and Jen unraveling an author’s mysterious life, is one of the most visually stunning and engaging novels you’ll encounter. No, I don’t mean “encounter this month/summer/year”–I mean “ever.” With its unprecedented mixed-media approach to storytelling, this book brings you along for the ride as you’ve never been before, and it’s a ride that you’ll never want to end. Take a look at our opened store copy and you’ll see what I mean. – Yashwina Canter

Shatter Me / Ignite Me / Unite Me

By Tahereh Mafi
Shatter Me, the first book in this trilogy, is good — somewhat predictable, and very much aware of the tradition established by The Hunger Games and Divergent, but good. But the second and the third books, Unravel Me and Ignite Me, SHINE. They highlight everything great about dystopian young adult fiction: A message of empowerment for a main character who initially personified insecurity, a message of redemption and personal growth, a message of progress, and a message of hope. Tahereh Mafi hits all the right notes. – Yashwina Canter

The Psychopath Test: A Journey Through the Madness Industry

By Jon Ronson
Jon Ronson once again presents a masterful blend of comedy and investigative journalism. His examination of psychopaths and the mental health industry had me fluctuating between fits of laughter and horror. If you’ve never read Jon Ronson before, you’ll be a devoted fan by the end of this book. – Ashton Hickey

By Edan Lepucki
There are few books for which I will sacrifice a good night’s sleep, but California is one of them. Set in what could be a very real near-future, Edan Lepucki presents a disturbing, unflinching narrative about love and family that captivated me from the moment I opened the book. I found myself ruminating on the novel when it wasn’t in my hands. It’s the kind of book that makes you rush home from work to read it and stays with you long after you finish it. – Ashton Hickey

The Most Dangerous Book: The Battle for James Joyce’s Ulysses

By Kevin Birmingham
Have you ever wanted to read Ulysses but felt completely overwhelmed or intimidated? You are not alone. Kevin Birmingham has given us the next best thing: A gripping biography about the incendiary novel that has so definitely changed our sense of what a novel can be. – Nathan Spoon

The Elegance of the Hedgehog

By Muriel Barbery, Alison Anderson
This book makes me cry, and sometimes that’s a really good thing. It’s like if a French impressionist painting were translated into a book; when I read it, I feel like I’m in the presence of Art, but not in a stuffy or pretentious way. It’s one of those books that when you finish it, you just have to sit quietly for a while because it doesn’t feel right to move on from what you’ve just read yet. – Sally Burgess

By Amitav Ghosh
Ghosh’s second novel explores the struggles of the Chaudhari family during the partition of India. Told from the perspective of a young boy, the narrative weaves in and out of time and perfectly captures the elusive space between memory and imagination. It will leave you with a renewed belief in the magic of everyday life. – Mythili Sanikommu

All the Light We Cannot See

By Anthony Doerr
This book first caught my eye early this summer, when lots of smart people I know were raving about it. So I looked it up, saw that one of the main characters is a French girl with my name — Marie-Laure — and decided I had to read it. I’m about halfway through it right now. Gorgeous writing, entrancing story. Grab a copy and read with me? – Mary Laura Philpott
* * *
Thanks to Bitter Southerner and Garden & Gun for including us in their awesome summer reading roundups! 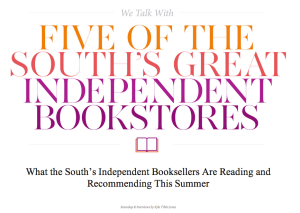