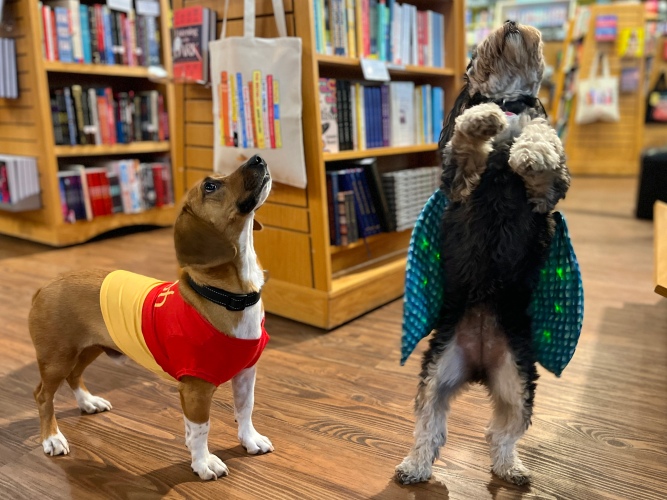 Let it be known: Halloween is not a holiday shop dogs enjoy spending at home. The doorbell rings incessantly, and you know how we feel about the doorbell. People not much bigger than we are arrive with rubber heads and sparkly wings but we are repeatedly admonished not to bark at them. Clearly WE ARE UNDER ATTACK. Then these little ghouls demand treats. “Tricks and treats, tricks and treats,” they scream, and our people rush to fill their sacks with treats, even though tricks are not in evidence. Guess what? We know plenty of tricks: sit, shake, roll over. We’d be happy to show you, but in return we’d like a treat because that is the sacred covenant between us. No? You’re too busy handing out treats to total strangers to notice the efforts of your best friend?

This is why the shop dogs of Parnassus prefer to stay in the shop when things get spooky. Peter gives us all the biscuits we need (we need a lot) and then we can settle down with a good book to chew on.

Since he’s just a little guy, Sparky likes his Halloween fare on the sweet side. There’s a Ghost in This House by Oliver Jeffers has transparent pages that show us how the ghost moves through the house. He’s also a fan of Bunnicula: The Graphic Novel by James Howe and Andrew Donkin, because seriously, how scary can a rabbit be? This rabbit theory holds strong with Creepy Crayon by Aaron Reynolds and Peter Brown, about a rabbit who gets hold of a sinister crayon. It’s creepy but not too creepy because it’s about a rabbit and a crayon.

Barnabus and Roxy can often be found wrestling in the back office. They disagree on who should be petted first and who should get to use the fluffy blue dog bed, but when it comes to scary young adult novels, they are in complete agreement. Sara Farizan’s Dead Flip is all about friends who used to be friends who have friends who’ve gone missing. No bunnies in this one. Equally scary are Erica Waters’ The River Has Teeth (more girls missing), Victoria Lee’s A Lesson in Vengeance (the haunting of a girls’ school), and Patrice Caldwell’s Eternally Yours (vampires, merpeople, angels, demons). It’s enough to keep a couple small dogs up at night.

Of course, resident grown-up dog Opie has his own Halloween favorites. He follows in the footsteps of his shop person Andy and prefers nonfiction. It hard to imagine a better seasonal read than Stacy Schiff’s book The Witches (the ones in Salem. Things don’t turn out well.) He also gives a dew-claw up for Colin Dickey’s The Unidentified: Mythical Monsters, Alien Encounters, and Our Obsession with the Unexplained (way to go, subtitle!), and Hayley Campbell’s All the Living and the Dead: From Embalmers to Executioners, an Exploration of the People Who Have Made Death Their Life’s Work (ditto).

Opie has also been known to pick up a novel every now and then, thank you very much. He’s a dog of many tastes, and he prides himself on being game for some pretty spooky stuff. Still, Grady Hendrix’s The Final Girl Support Group shook him up (there was a massacre. He doesn’t want to talk about it). Silvia Moreno-Garcia’s The Daughter of Doctor Moreau (a new twist on The Mysterious Island of Doctor Moreau, which was scary enough to begin with) and Simone St. James’s The Book of Cold Cases (a true crime blogger gets more than she bargained for. Don’t they always?) both had the fur on the back of his neck standing up.

If you’d like to take a step back from the abyss, follow the reading recommendations of shop-dog-in-training, Winnie, who’s just here for a good time and some cozy autumn vibes. He’s loving Juneau Black’s Mirror Lake (the third novel in the Shady Hollow mystery series in which Vera Vixen investigates the alleged murder of a rat. That’s more our speed), Hazel Beck’s Small Town, Big Magic (a witchy rom-com. Now you’re talking!), and Bianca Marais’s, The Witches of Moonshyne Manor (“Why were we taught to fear witches, and not the men who burned them?” is what it says on the cover. GOOD QUESTION!)

All this scary talk has stirred us up. We, the shop dogs of Parnassus, have decided the safest thing to do is cram ourselves under Sissy’s desk in the back room. All of us at the same time. We’ll check in at Thanksgiving. Now that’s our kind of holiday.