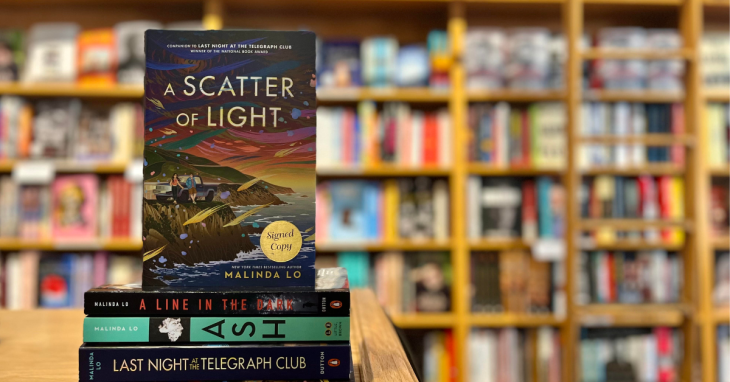 Malinda Lo is nothing short of a trailblazer. Since 2009, she has been writing unapologetically queer stories and forging a path for other queer authors, particularly queer authors of color, in traditional publishing. The magnitude of her contributions to the young adult queer literary canon cannot be overstated — her 2021 novel Last Night at the Telegraph Club was the first LGBTQ+ YA winner of the National Book Award, as well as the first F/F winner of that honor. In addition to her novels, she has done meticulous research about LGBTQ+ representation in YA books, and her statistics have been widely circulated and cited as part of the effort to raise awareness about the lack of representation of queer folks in YA literature.

Lo’s new novel, A Scatter of Light, is a companion novel to Last Night at the Telegraph Club but leaves 1950s San Francisco for the more modern setting of the summer of 2013, when the Supreme Court first made major decisions in support of same-sex marriage. Adults and teens alike won’t want to miss this gorgeous coming-of-age story or the chance to hear about it from the author herself at the Southern Festival of Books on October 15 at 12:30pm. Musing editor Sarah Arnold chatted with Malinda ahead of her Southern Fest event!

Sarah Arnold: Last Night at the Telegraph Club was an immediate staff favorite, and we certainly weren’t alone in our love for it! It won the National Book Award for Young People’s Literature, a Stonewall Book Award, the Asian/Pacific American Award for Youth Literature, and a Printz Honor (!!!). A Scatter of Light is another queer story set in the Bay Area, but this time it takes place in the modern era. What inspired you to move from a historical novel to one set much closer to present day?

Malinda Lo: I actually started writing A Scatter of Light in 2013, so that’s why it’s set in that year. It came to me before Last Night at the Telegraph Club, and it was supposed to be a contemporary novel. But when it went on submission in 2014, it was rejected by almost two dozen editors, and I couldn’t get it published. 2013 was a different time for LGBTQ YA, and while some editors complimented my writing, they were also very uncomfortable with the queer sexuality on the page. Although I wasn’t able to sell A Scatter of Light in 2014, I did find an editor who wanted to work with me (Andrew Karre at Dutton), and I wrote a psychological thriller called A Line in the Dark. Then I had the idea for Last Night at the Telegraph Club, and when Andrew offered to buy that novel, he also offered to buy A Scatter of Light. At the time, I thought that Scatter was finished, but I couldn’t turn down the chance to work on it again. We agreed that Telegraph Club should come first, because at the time it was early 2017, and it seemed as though the 1950s actually had quite a bit of relevance to what was going on. However, it took me three years to write Telegraph Club! And while I was writing it, I realized that it was connected to A Scatter of Light. When I finally went back to revise Scatter in 2020, I was able to weave in those threads. We also decided to leave it set in 2013 so that I would not have to deal with the pandemic. So this book has had quite a convoluted journey!

SA: Your books have such a strong sense of place. I can almost feel the chill of the fog rolling over the San Francisco Bay when I read your prose. What is the significance of the Bay Area for you? Are there other places that hold a special place in your heart that you’d like to write about?

ML: I lived in the Bay Area for 15 years – 15 incredibly formative years of my life. I found a wonderfully welcoming lesbian community, made close friends, and I met my wife there. So obviously the place means a lot to me. I live in New England now, which also is quite meaningful to me because I went to college here, where I made the most enduring friendships of my life. A Scatter of Light is dedicated to eight of my closest friends from college. I’ve written about New England in A Line in the Dark, and the main character of Scatter is from Massachusetts. I always want to give my books a strong sense of place, so if I don’t have a personal connection to a place I try to visit there and learn about it. I imagine that’s what I’ll be doing in the future, because I know that I want to write about some places that I’ve never lived in.

SA: Aria’s queer coming-of-age journey in A Scatter of Light is one that I think a lot of young, queer people will find relatable and cathartic, in both the moments of thrilling discovery and of quiet conformity. So first, I want to thank you for your work in bringing this beautiful and authentic representation to a broad audience. And then I’d love to know more about your creative process when developing characters like Aria. How much of your personal experience lives in your characters?

ML: I’m certainly in every single character I write in all my books, but none of the characters is me. I tend to draw on emotional experiences I’ve had to inform what I’m writing, but very rarely in a one-to-one correlation. For example, Aria’s relationship with her paternal grandmother is inspired by the one I had with my paternal grandmother, but our actual relationships are quite different. The way I felt about my grandmother, though, is reflected in the way Aria feels about Joan. Similarly, the queer community that Aria meets in Scatter is definitely informed by the friends I made in San Francisco, but that means that characters like Mel are kind of amalgamations of people I knew. There is one direct correlation in Scatter, though. Analemma, Joan’s black lab, is one hundred percent my dog Spygirl, who died in 2018. I missed her so much I had to write her into the book!

SA: We always like to finish up with this question: What is your favorite thing about indie bookstores?

ML: Ever since I was first published in 2009 with my novel Ash, indie bookstores were often the only places where I could find my books consistently. As an author, it can be really sad and hard to go into a big bookstore and not see any of your books anywhere; it often makes the book shopping experience kind of horrible. But I always knew that my books were much more likely to be carried at independent bookstores. My books haven’t always been seen as popular or mainstream, so I’ll always value indie bookstores for seeing my work before it became more widely known. You all supported me for so long! I just want to say thank you for that. It really made me feel like a real author.

Malinda Lo will appear at the Southern Festival of Books on October 15 at 12:30pm, and a signing line will follow at 1:30pm (you can view the full schedule here). We’ll see you on the Plaza!