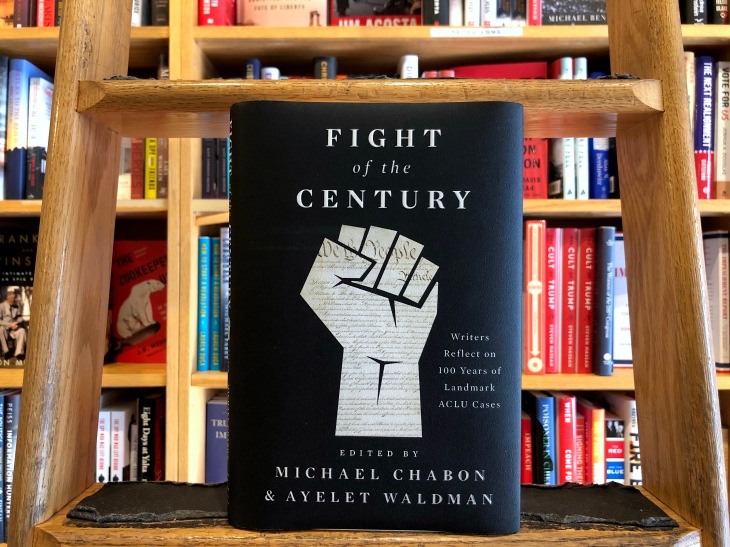 In the new book Fight of the Century: Writers Reflect on 100 Years of Landmark ACLU Cases, editors Michael Chabon and Ayelet Waldman convene an incredible array of authors to comment on, contextualize, and otherwise bring to life a century of court cases brought by the American Civil Liberties Union. The writers include our own Ann Patchett, who is joined by Salman Rushdie, Jesmyn Ward, Louise Erdrich, Yaa Gyasi, Viet Thanh Nguyen, Lauren Groff, Andrew Sean Greer, Scott Turow, and the editors themselves — to name but a very few of the 40 incredibly accomplished contributors.

Each writer takes a landmark case that involved the ACLU in some way, and illustrates what’s at stake both in the decision and beyond it. In one chapter, Ann Patchett writes about the possible connection between the publication of The Grapes of Wrath and the 1941 case Edwards v. California, which struck down as unconstitutional a law that had made it a misdemeanor to knowingly transport an indigent nonresident into the state of California: “A voice rises up through experience, is made into art, and art then shapes the law.”

In their introduction, Chabon and Waldman describe the contours of their project and the importance of the ACLU’s work.

Every year the moon is struck, and its cratered face forever marred, by tens of thousands of asteroids and meteors. At least that many bodies rain down on Earth over the same period, and yet the Earth has very few craters and endures only a handful of relatively insignificant impact events every year. The difference, of course, is that unlike the moon, the Earth is blessed with and enveloped by an atmosphere that constantly shields it from attack. The Bill of Rights serves a similar protective function for individual Americans and their civil liberties, which, like the Earth, are and have always been under constant, relentless attack. From Plessy v. Ferguson in 1896 to Trump v. Hawaii in 2018, our federal and state governments — often abetted by the courts — have sought to curtail, constrain, and infringe on the rights defined and enshrined in James Madison’s remarkable document. The protections of liberty and equality it guarantees have always been menaced by the overweening instruments of state and majoritarian power. But lately, as in some science-fiction thriller where the Earth is threatened by a monstrous, meteor-spewing aberration in space-time, the rate and intensity of those attacks seem to be increasing. Meanwhile, agents of the government are at work doing what they can to dilute and undermine both our protective atmosphere and people’s belief in its integrity.

Things, we feel, have been getting worse. Liberty and equality are everywhere under attack. And that’s why the work of the American Civil Liberties Union feels more precious to us than ever before. The ACLU lawyers and staff are the brave souls who suit up, blast off, and do what they can to divert and repel all those incoming meteors, or blow them right out of the sky. We admire them. We admire them the way you must admire people who devote themselves to doing, to the utmost of their ability, any thankless, impossible, and absolutely essential job.

Liberty and justice for all. We used to stand up with our classmates every morning and timelessly pledge liberty and justice for all, even and especially for those (as the Supreme Court, agreeing with the ACLU, ruled in West Virginia State Board of Education v. Barnette) whose consciences rebel at being compelled to pledge allegiance to a flag or to a country “under God.” The Bill of Rights protects pledgers and nonpledgers alike, but of course it is only the nonpledgers — the contrarians, the cranks, the nonconformists, the radicals and fanatics, the outsiders and the ostracized, the powerless and unpopular and imprisoned—who ever really need its protections. They also tend to be the ones least likely to receive those protections — not without a fight, anyway. That’s where the ACLU comes in.

The history of the ACLU is one of struggle, combat, of marginalized people and unpopular causes, of troublemakers and conscientious objectors, a history of battle and strife. But it is also the history of the very best our country has to offer to its citizens and, by way of example, to the rest of the world: the strong, golden strand of the Bill of Rights and the ideals it embodies, often frayed, occasionally snarled, stretched at times to the breaking point, but shining and unbroken down all the years since 1789. The ACLU holds the government, the courts, and the nation to their avowed and highest standard, insisting on the recognition of the protections the Constitution affords to every American, no matter how marginalized, no matter how unpopular the cause, even if the people it protects sometimes despise the freedom it represents.

As American Jews in our fifties, we both remember, powerfully, the moment we each first understood the austere and lonely fight of the ACLU, the thankless road to freedom on which it plies its trade. It was 1977, when the ACLU took on the case of the local branch of the American National Socialist Party, whose members wanted to hold a march along the main street of Skokie, a predominantly Jewish suburb outside Chicago. We remember wrestling with the difficult idea that the ACLU could be on the side of good (the First Amendment) and evil (Nazis) at the same time. To understand the vital role that the ACLU plays in American society requires a nuanced understanding of the absolute value of freedom of speech, freedom of assembly, freedom from unwarranted search and seizure, of the right to due process and equal justice under the law, even — again, especially — when those rights protect people we find abhorrent or speech that offends us.

Nuance unfortunately seems to be in very short supply nowadays. In these pages, we have collected essays by some of our country’s finest writers — not just because writers are and have long been among the principal beneficiaries and guardians of the First Amendment but also because they traffic, by temperament and trade, in nuance and its elucidation, in ambiguity and shades of gray. We turn to writers, here and in general, to help us understand and, even more, grasp both ends of ambiguities, to expand the scope of our vision to encompass the whole gray spectrum of human existence, in all its messy human detail.

Each of the writers in this book has chosen a seminal case in which the ACLU was involved, either as counsel or as amicus curiae — friend of the court — and made it the subject of an essay. Some have chosen to dig deep into the facts of the case and bring them vividly to life. Others have focused on their own personal experience with the civil liberty — and its abridgment — at issue by the case. Still others have crafted impassioned pleas on behalf of the rights being challenged or upheld in a particular Supreme Court case or have even, in at least one case, taken a reasoned position opposed to the ACLU’s own. Regardless of approach each of the writers has, we hope you will agree, produced something thoughtful, challenging, enlightening, and as worthy of your time as the ACLU is worthy of your support.

Copyright © 2020 Michael Chabon and Ayelet Waldman. Excerpted, with permission, from Fight of the Century: Writers Reflect on 100 Years of Landmark ACLU Cases, published by Avid Reader Press, an imprint of Simon & Schuster. All rights reserved.