Eleven-year-old Riley used to think the Whispers — magical wood creatures that grant your wishes if you leave them tributes — were a made-up part of the bedtime story his mother used to tell him. But then Riley’s mother went missing, and somehow Riley has become suspect number one in the police investigation. Bullied at school for his “condition” — having crushes on boys instead of girls — Riley is concerned that his difference may be the reason why his mother disappeared. Now he believes the Whispers may offer his only chance of finding her, so he sets out on a camping trip with his best friend, Gary, and his eighth-grade crush, Dylan, to find out the truth once and for all.

That’s what’s going on in The Whispers, Greg Howard’s new novel for young readers. Can you see how I was hooked?

Nashville-based Howard set his new book in the lush country of South Carolina, the perfect backdrop for this exploration of love, loss, and self-discovery. Much needed by today’s young readers, The Whispers handles issues of identity in a way I hadn’t seen before and found refreshing. A touch of magic and plenty of witty narration round out this winning novel, creating an unforgettable and wholly unique reading experience. Whether you’re a parent or a teacher, I can’t wait for you, your kids, and/or your students to experience it. It was my pleasure to interview Howard about his new book, and if you’re in Nashville, I hope you’ll join us for his book launch celebration on publication day of The Whispers, next Tuesday, January 15, 2019, at 6:30 p.m. Here’s our Q&A. –Katherine Klockenkemper

Katherine Klockenkemper: Congratulations on your debut middle grade novel! You’ve said that this book is heavily based on your childhood. Tell us about the process of sharing such a personal story — how much or little of yourself did you put on the page? 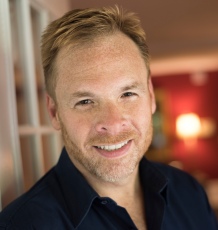 Greg Howard: Thank you, Katherine, and great question. Actually, I left quite a bit of myself on the page in The Whispers. I’m sure my family will think so anyway when they read it. I wanted to write about my experiences growing up as a gay kid in the rural deep South and also my relationship with my mother, but in a fictionalized way. So, I lent my main character Riley many of my own memories, experiences, family members, fears, joys, habits, quirks, etc. And I found releasing all those things to Riley came pretty easily. It was profoundly freeing, actually. One example of this is Riley’s dog, Tucker, who is based on my real-life dog, also named Tucker, and he was exactly as described in the book. But I had Tucker as an adult, not as a child. Riley’s grandparents are pretty much my grandparents; I wet the bed like a champ until the fifth grade or so; the trauma Riley experiences was based on my childhood trauma; and many stories from Riley’s life history and family lore — including the burial of can’t and if, the missing family photo albums, and my mother being a local beauty queen — were harvested from my life.

KK: The details and sense of place were so strong that at times I felt like I was watching a film. Is that the secret to pulling off magical realism in a way that resonates with young readers?

GH: I’ve been told I write cinematically, and I guess that’s because I’ve always been such a huge film buff. I want to see what I’m writing in my mind as I’m writing it. And also, probably because Pat Conroy is my favorite author. His writing is so cinematic and beautifully crafted, especially his descriptions of Southern settings. Conroy’s influence is ever-present in my writing process and I hope it always will be. Plus, having set the story in an area where I spent many years of my youth, when I was describing the setting, I was basically describing it from memory. And during those pre-teen years I think a sense of place gets deeply rooted in our psyche.

As far as incorporating magical realism, I think that comes from that strong sense of place coupled with a decidedly vivid imagination. And at that age, I sure had that in spades, as many kids do. I think it’s easier for kids to accept the possibility of magic, wonder, and fantasy in their material world. They’re more open to it.

KK: How did it feel to write in the voice of an 11-year-old after writing the teenagers in your last book, the young adult novel Social Intercourse? Which age did you find more challenging to write?

GH: It was a completely different experience, for sure. In Social Intercourse, the teen characters are highly self-aware, self-absorbed, and flawed. And though Riley has his own flaws in The Whispers (and I don’t mean the flaws he thinks he has, which he calls his “conditions”), he’s filled with an innocence and a beautiful sense of wonder, kindness, and hope, to which I really enjoyed surrendering myself. And without a doubt, I found the teens in Social Intercourse more challenging to write. But both were extremely satisfying voices to get lost in.

KK: I keep thinking about a character named Sister Grimes — she’s the mother of a bully at Riley’s school. Riley overhears her gossiping about him, suggesting that Riley’s homosexuality would “kill” his mother if discovered. Is this character based on a real person/people or experience from your childhood? (And what is it about hearing things we aren’t meant to hear that motivates us to extremes?)

GH: Ah, yes. Good old Sister Grimes. Well, she wasn’t based on a real person. However, the situation did happen in my childhood when I overheard a lady of the church say exactly that—that it would kill my mama if she knew I was “funny.” I didn’t know what “funny” really meant, but I’d heard it enough to have a pretty good idea. Of course, I wasn’t meant to hear the comment, but I did. And it haunted me for a long time, producing crushing guilt and shame.

When a child hears something like that, especially coming from an adult, it carries a tremendous amount of weight and can do a lot of damage. Adults are always right. That’s what I was always taught, anyway. So, I literally thought that my mama was in mortal danger just because I was who I was — something I knew I couldn’t change.

KK: When this book first came to my attention, I heard it compared to Bridge to Terabithia. Obviously, your book will be sitting on shelves alongside the classics of children’s literature. What do you hope it adds to those shelves? That is, what does your book offer readers that complements what’s already out there?

GH: Well that’s an incredibly humbling thought. But if it proves true, I think what The Whispers will add to those shelves is representation of a segment of children who don’t see themselves in middle grade books very often and who are sometimes erased all together. Some people have told me that I’m courageous for writing middle grade stories with queer main characters, but it doesn’t feel courageous at all. It just feels right. I have a responsibility to those marginalized and sometimes forgotten kids, to let them know that they’re not alone. That there’s nothing wrong with them. That they are seen, and most of all, that they matter. Because I was in their shoes for many years and I know what a dark and lonely space that can be in which to exist.

KK: I’m curious about what kind of reader you were as a kid. What were your favorite books growing up, and how did they shape you?

GH: Unfortunately, I wasn’t taught good reading habits at home, so the reading I did was in school, and the habits I learned from teachers. I was exceedingly fortunate to have wonderful English and Language Arts teachers all throughout school. As I kid loved the Encyclopedia Brown series, The Boxcar Children, Charlotte’s Web, Stuart Little, and How to Eat Fried Worms. As you can see my tastes were very refined and varied.

GH: I love all the possibilities that exist inside a bookstore — the many different stories, worlds, and characters waiting to be explored and discovered. And that everyone there is on the same mission — to find that one, or two, or 10 books that we decide to invest a little bit of ourselves in when the choices are as endless as the possibilities.

Greg Howard
Author of The Whispers
Parnassus Books
Tuesday, January 15, at 6:30 p.m.
This event is open to the public and free to attend. Bring your upper elementary and middle school students to meet the author of this touching soon-to-be classic!