Barbara Kingsolver and I once did a conversation together in a little town in North Carolina, except that it wasn’t really a town. It was more like a cluster of buildings at a crossroads in the woods between two mountains. Barbara had been asked to help raise money for the tiny local library, and she said she’d do it if I went with her. We met in Asheville and then drove into the mountains together. We got seriously lost along the way but we didn’t care. It was a pretty drive and we were feeling all Thelma and Louise, the way two women often do in such circumstances. Our conversation turned to friendship, and Barbara said she thought it was strange that we’d become so close so quickly. She said that usually it took her a long time to get to know someone.

I reminded her that our friendship had hit the ground running.

In honor of Barbara Kingsolver’s triumphant return to Nashville on Friday, November 2, 2018, I thought I would take this opportunity to recount our origin story. There are lots of ways writers become friends. This is one of them.

When Barbara agreed to come to Parnassus in 2012 for her last novel, Flight Behavior, I invited her to stay at our house. The store had only been open for a year at that point, and the fact that she’d agreed to come was a very big deal for us. Barbara and I had never met before, but we’re both published by Harper Collins and, more importantly, we share the world’s greatest publicist, Jane Beirn. I sent the invitation through Jane and word came back that yes, Barbara would sleep over. She’d be arriving by car from Asheville on the day of her reading, sometime after three o’clock.

I was excited and, of course, a little nervous, but I’d grown up in a slumber party culture and still believed a sleepover was the best way to get to know a person. Then the day before Barbara was due to arrive, my Texas stepfather called and said he needed to fly up and talk to me about something Very Important. Mike was a man of grand gestures, and he would never tell you anything over the phone if he could get on a plane and tell you in person. He wanted to know if he could come over for lunch the next day.

He asked what time she was arriving, and when I said three o’clock, he promised he’d be out of there by two. Again he stressed the fact that it was Very Important that we talk immediately and in person.

None of this alarmed me. I knew Mike was fully capable of flying up to have a heart-to-heart about the new Cormac McCarthy novel or the latest Clint Eastwood film (he found those late Eastwood films very moving). I sighed. I said okay.

I cleaned the house. I put fresh flowers and bottled water in the basement guest room. I made lunch for Mike, who in turn showed up promptly at noon.

Even this wasn’t strange. It was dramatic, sure, but that was Mike. We ate our lunch. We talked about different people in our family. We talked about politics. I asked him if he wanted some pie (I’d made a pie for Barbara) and he did, so I got him a piece.

He ate his pie. He asked for coffee. Then we went to sit in the den and he began to cry. This wasn’t so unusual either. Mike was a hugely sentimental guy who had been known to cry over birds and leaves and the changing of seasons. When I was growing up he would cry so hard at movies that the entire family would get up and move to another part of the theater. I was still feeling fairly confident that whatever the problem was we could get it wrapped up on schedule. It was only one o’clock.

And then there was a knock on the door.

Reader, my heart stopped beating for a minute. I left my quietly sobbing stepfather and went to the door. There was Barbara Kingsolver on my front porch with a little roller suitcase. I stepped outside and closed the door behind me. She was friendly and fresh and even prettier than her jacket photo.

“I’m really early,” she said. “I got an early start, and there was no traffic, and I forgot about the time change.”

There are times in life when honesty is the only option and this was one of those times. I told her as quickly as I could that my stepfather, who was no longer married to my mother, was in the den crying and she needed to go downstairs and wait. There were loads of books downstairs. Would that be okay?

She thought about it for a minute. “I’m really hungry,” she said. “I didn’t get breakfast.”

So I hustled Barbara Kingsolver down to the basement and ran back up to make her a grilled cheese sandwich. Mike, still crying, came into the kitchen.

“What is going on?” I asked him. This time I was less patient.

“I’m taking you out of my will,” he said, mopping at his face with a handkerchief. “You’ve done so well.”

I flipped the sandwich onto a plate. I asked him to hold onto the thought. I cut the sandwich in half and put a pickle and a couple of carrots on the plate, then I ran it downstairs.

“How’s it going up there?” Barbara asked.

“Not great.” I handed her the plate and ran back up.

I reminded Mike that I was the one who’d been badgering him to take me out of his will for ten years now.

“I’m afraid that when I die you’ll think I didn’t love you,” Mike said.

And suddenly I felt a little teary myself. “I know you love me.”

“Hello?” Barbara called from the top of the stairs.

I ran over to see if I could corral her back down to the basement for just a few more minutes.

“Sparky ate my sandwich,” she said. “Well, he ate half of it. I’d just turned my back for a minute.” She admitted that she had left the plate on the edge of coffee table, exactly at nose height. She was worried that he might get sick, but Sparky wasn’t sick. He was ecstatic.

I got Barbara back into the basement and Mike finished his cry. We lapsed into a few minutes of sentimental conversation before it was time for him to leave for the airport. Then I went down to the basement, fell face down on the sofa, and told Barbara everything. Then she told me everything, and after that we were very close. She’s one of the four people in my life who has ever called me Annie. I love her for seeing that in me. 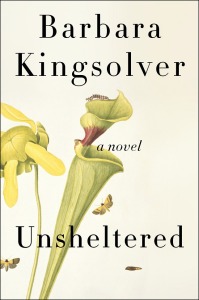 As for the new novel — which is also our First Editions Club selection for November — Unsheltered is everything a Kingsolver reader could hope for. This book is smart, ambitious, unexpected and wide-ranging. By the end I was left with a wonderful feeling of having been simultaneously entertained and educated.

Unsheltered is the story of two families who live in the same hopelessly wrecked house in New Jersey, one of them in the 1870s and the other in this present day. Their struggles, which are revealed in alternating chapters, are both personal and political, and they turn out to be not wholly dissimilar. We never stop needing to find our place in the world. We never stop needing to be sheltered.

I hope we’ll see you soon.

Salon@615 with Barbara Kingsolver, 6:15 p.m. at Montgomery Bell Academy
Salon@615 is a Nashville event series and collaboration among Parnassus Books, Humanities Tennessee, the Nashville Public Library and Foundation, and BookPage. Free general admission tickets and more information are available at this link.

Luncheon with Barbara Kingsolver, 12:30-2 p.m. at L.A. Jackson
Parnassus Books and L.A. Jackson are delighted to present a special luncheon with bestselling author Barbara Kingsolver, in conversation with Ann Patchett. Your $80 ticket includes a gourmet plated lunch prepared by Nathan Duensing, the executive chef of the Thompson Hotel, dessert by award-winning pastry chef Lisa White, an autographed first edition of Unsheltered, and an afternoon of intimate literary conversation and fellowship. The luncheon takes place at L.A. Jackson (401 11th Avenue South), and tickets are available (while they last!) at this link.