One thing I always tell readers when I hand-sell Claire Cameron’s books — which I do often, and as a pair whenever I can — is that she pulls off the seemingly impossible with her choice of narrators. A five-year-old girl in The Bear? An actual Neanderthal as the narrator of The Last Neanderthal? Both times I’ve thought, there’s no way she’s going to be able to do this, and then she does it, exquisitely and believably.

So I asked her: How do you do it? And why? Below, she tells us. I can’t wait for you to meet her at the Southern Festival of Books, coming up in Nashville this week, and I hope you’ll read through to the end to find out where and when you can see her and so many other amazing authors at the festival. See you this weekend! 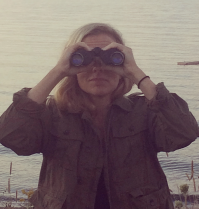 Let me tell you, while writing both of these novels there were times when I felt the same way. I remember stopping typing and wondering, “What am I thinking?” I still don’t know the answer, but I do know that the voice for each novel came in a different way.

When I started The Bear, I didn’t purposefully set out to write a novel in the voice of a five-year-old. I had two young boys at the time. I was trying to look after them and work. I felt busy, overwhelmed, and, as someone who thrives on good sleep, exhausted. My creative life seemed to be completely at odds with my home life. When I did get a chance to write, my work was no good. (I’ve since re-read some of it and can confirm it was truly terrible.)

My five-year-old was a big talker at the time. He spoke his inner thoughts out loud, like a small David Attenborough narrating the movements of the wildlife as it passed through our house. One day, his younger brother, two years old at the time, bumped his knee. There wasn’t a cut, but he wanted a Band-Aid for the mental bruise. While I searched for a Band-Aid, our small world suddenly seemed to fall apart. A much-loved toy broke, the dinner started to burn, and I stepped in an unidentifiable puddle on the floor. While all this was going on, my older son started questioning my methods. I should only give away Band-Aids when there was blood, he said. I was wasting these precious things.

I remember listening to this critique of my Band-Aid dispensing as I dried my foot, turned off the burner, and started fanning smoke out of the kitchen. The smoke may as well have been coming out my ears. I felt like I was about to blow. I nearly yelled, but I caught myself. Was I really going to yell at my five-year-old for his thoughts on Band-Aids?

Instead of yelling, I started laughing. The kid had a good point.

And after that, I started to make a point of listening. We refined our Band-Aid policy and moved onto larger issues. He had answers for everything: how a dog thinks with his nose, why sadness drips, and why cookies should have sparkle. We also talked about his grandmother, who had died the year before. It became clear that he hoped she might still show up for the holidays.

As a young mother, all this listening was a revelation. I had been so busy talking for and over young children that I’d forgotten that other part, the listening. While the main character in The Bear, Anna, isn’t my son, our conversations established a framework for Anna’s inner world. The voice was the merger of my creative and home life.

For The Last Neanderthal, my most recent novel, the voice came from a completely different direction. Like my longstanding fascination with bears, I’ve always been interested in Neanderthals. In school I was taught that they were an evolutionary step between humans and the apes. We evolved from them and they died off because they were inferior to us.

But since the Neanderthal genome was sequenced in 2010, scientists have revised their thinking. They were much like us. Many people from Asia and Europe have 1-4% Neanderthal DNA (I have 2.5%). Not only were they physically similar, but we also shared behavior that was previously believed to be exclusively human, like burying our dead, making jewelry, and using toothpicks.

To think that I have Neanderthal inside me is mind bending — like finding a long lost family. But for a long time, I didn’t think I was the right person to write this story. 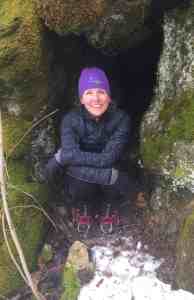 That changed one day in winter when I was snowshoeing near a rocky, limestone outcrop. (I live in Canada.) The temperature was around freezing and I ducked into a small cave to explore. I had just been reading a debate between experts — did Neanderthals live in caves? Inside, it was cold, miserable, and wet. I am a mountaineer and know from making snow huts that they can be warm and snug. I had no doubt that if I lived outside in a cold climate, I would not choose to live in a cave.

I saw how my experience living and working in the outdoors could help me imagine how living 40,000 years ago might feel. This time it was my research and my experience in the wilderness that merged.

When writing The Last Neanderthal, I tried to imagine how modern humans and Neanderthals made contact. Scientists can take speculation only so far; whereas a novelist is someone who can take the risk of imagining answers.

After trying a lot of wrong directions, I found myself conjuring up how it would feel to meet a Neanderthal in the woods. In my mind I walked up to one, a female named Girl with a shock of red hair. I could see her strength. I could hear her, smell the bison meat she ate, and felt the heat of her skin. I saw her so clearly that I immediately knew that she was the star of The Last Neanderthal. She came alive to me. I started to write.

See acclaimed novelist Claire Cameron on a panel called “The Days Are Long but the Years Are Short: Novels of Motherhood” at the Southern Festival of Books on Friday, October 13, at 3 p.m. along with writers Bren McClain and Anna Schachner. Then at 9:30 a.m. on Saturday morning, Cameron will join Wiley Cash (The Last Ballad), Nicole Krauss (Forest Dark), and Stephanie Powell Watts (No One is Coming to Save Us) for the Coffee with Authors panel, moderated by Mary Laura Philpott and sponsored by the Women’s National Book Association. (It’s free to attend and open to the public, just like the rest of the festival — but for this event, reservations are recommended to hold your spot. Email Lee Fairbend to RSVP: LFairbend@comcast.net)