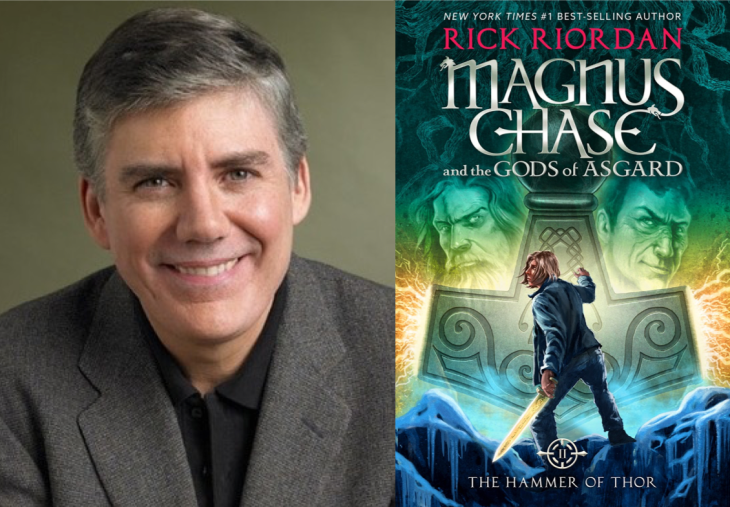 You may think you know a lot about Rick Riordan. For example, you probably know that he’s the #1 New York Times bestselling author of the Percy Jackson series, the Kane Chronicles, the Magnus Chase and the Gods of Asgard series, and the Trials of Apollo. You might know that he has just established his own imprint at Disney, through which he’ll be publishing books written by others about the mythologies of different cultures. If you have an older elementary or middle school aged child, you definitely know that his public appearances draw Beatlemania-type crowds — as he’s sure to do on tour for his latest book, The Hammer of Thor, the second adventure chronicling the exploits of Riordan’s newest hero, Magnus Chase.

But do you know how to pronounce his last name? All of us in the Parnassus office know how to say it, and it still trips us up. (“Reardon?” “Roardon?” “Rrrrrr-di-on?”) In case you have the same problem, it’s: RYE-ur-dun, with a long i — like rye bread. Riordan.

And did you know he’s a Beyoncé fan? Yep. Read on for more fun facts, as Riordan takes our Authors in Real Life quiz:

I’ve been listening to: I’m pretty omnivorous when it comes to music — Beyonce’s Lemonade, some old radio standards of Frank Sinatra from the 1930s-40s, Leslie Odom Jr.’s new album, the Decembrists, the National, and lots of instrumental jazz when I am writing.

I love to watch: Mostly TV shows while I am on the treadmill or traveling. Very rarely do I watch movies. Really enjoyed Stranger Things, but that’s pretty obvious. I’ve been watching Power, The Last Ship, Hap & Leonard and The Night Manager — all great.

Something I saw online that made me laugh, cry, or think: The strangest sentence I’ve seen online this week was, “OED welcomes moobs, yolo.” It’s like a miniature short story all by itself.

Best meal I’ve had in the past month: Reindeer stew in Honningsvag, Norway. They really know how to cook up some nice Rudolph.

A creator who’s doing something I envy: N.K. Jemisin, who just won the Hugo Award for The Fifth Season. That book blew me away. She is creating some of the most beautiful, important science fiction of our times. I so admire her writing.

The book I most recently recommended to someone else: Harlan Coben’s thriller Home, which I haven’t even read yet! But my mom is a big fan of his protagonist Myron Bolitar, and she was ecstatic when I told her Myron was making a return in Home. I know Harlan’s writing well enough to know it’s going to be amazing. I have also been raving to anyone who will listen about Joshua Khan’s new middle grade fantasy series that starts with Shadow Magic. It’s wonderful.

The last event I bought tickets to was: Paul McCartney at Fenway Park. Lifetime dream to see him. The Beatles were so important to me in high school and beyond, though I am a second-generation fan. What a show that was — the guy still has it.

Most meaningful recent travel destination: I mentioned Norway. My family got lost in the valley near the village of Flam and made our way through this amazing countryside of goat farms, mountains, waterfalls and forests. It was like stepping back into the Viking times, minus the scary big guys with battle axes.

I wish I knew more about: Ancient history. The more I know, the more I realize I don’t know very much. So many primary sources have been lost. So much information was never recorded. The past is my favorite mystery.

My favorite thing about bookstores: You mean aside from the cats, right? I love the cats.

I really like the hand-written recommendations that line the shelves of a good independent book store. I can take a self-guided tour and get as many book-talks as I want! I always find something new and exciting to buy and read. 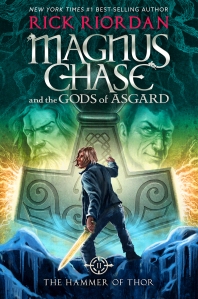 GET YOUR TICKETS NOW!

This is a Salon@615 event, a special collaboration of Parnassus Books, The Nashville Public Library and Foundation, Humanities Tennessee, and BookPage. There are two ticket levels available: $27.50, which includes a signed copy of The Hammer of Thor, and a $10 ticket that does not include a book. This is a general admission event (no assigned seating). There will be no public signing line at this event; so the only way to get a signed book is to buy the book-with-ticket option, or to purchase a signed book at the event. Find tickets and more details at this link.

Special offer! There is a GROUP RATE available for this event. If you’re planning to bring a group of 20 or more people, contact the TPAC box office at 615.782.4040 (or go to the box office in person). Tell them codeword “THOR” and you’ll be able to get your 20+ tickets at a discounted rate of $5.50 apiece. (Book purchases must be made separately, either at the event — where signed books will be available for sale — or beforehand from Parnassus Books.)