Karl and I went to Norway back in May. Ever the intrepid reporter, I was writing a piece for Conde Nast Traveler (it will be in the August issue), and I brought what I hoped would be the right number of books, but it didn’t work out. I ran out just before we left Oslo, and so Karl and I found a bookstore where I could get something to read on the plane.

In the small English language section I picked up a copy of Brooklyn by Colm Toibin, and something called Illustration School: Let’s Draw Cute Animals, by Sachiko Umoto. This is why it’s good to leave to leave the country every now and then and run out of books, because I wind up with things I would definitely have missed otherwise. Brooklyn (you probably already know this) is a beautifully written and oddly comforting novel about good people trying to do the right thing. When I got home I gave it to my friend Sister Nena and she gave it the nun’s seal of approval. As for Let’s Draw Cute Animals, well, I now know how to draw a bear walking and a pig sitting down and an otter swimming on its back. 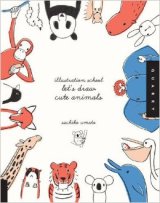 But here’s the thing: anyone could sell you a copy of Brooklyn. Irish girl! Homesick! What’s not to love? And I bet if we cleared out all the other books in Parnassus and sold nothing but Let’s Draw Cute Animals we could probably still stay in business. I cannot imagine whose life would not be improved by the ability to draw cute animals. But a real bookseller is someone who can point out not only the obvious, but can direct you gently towards the books you might otherwise miss — the books you might think are too difficult or sad or just not your thing. Didn’t I tell you to read When Breath Becomes Air? Wasn’t I right about that? Well, here are my three hard sells of summer, three books I found to be brilliant and necessary, three books you might be tempted to walk right past. Hear me out:

I had two advance copies of In the Darkroom by Susan Faludi in my office for months before it came out and I didn’t touch it. It wasn’t until I started reading the rave reviews (the cover of The New York Times Book Review, on Father’s Day, no less) that I decided to give it a try. It turns out the book is nothing short of astonishing.

Susan Faludi, journalist, winner of the Pulitzer Prize, and the author of Backlash, had an extremely difficult father. He was violent and bullying, and after her parents divorced she and her father fell out of touch. It wouldn’t be much of a stretch to imagine that her domineering father helped make her the feminist she is today. They had more or less not spoken in 25 years when she got an email from him saying that he had moved back to his native Budapest, would like to catch up, and was now a woman named Stefanie. Maybe Susan would like to write a book about her?

So she did. With more then 10 years of research and interviews, it is a monumental piece of work. But while the book explains more than I ever knew about the transgender experience, it’s also an exploration of the Jews in Hungary, the fascinating history of her family, and the atrocities of the second World War. It addresses deep questions about gender identity and gender roles. The whole thing is strange, unexpected, brilliant, and riveting. I would recommend it to anyone.

The second book I loved this summer is Ben Winters’ Underground Airlines. This falls into that vast category of “Books I Read Because I Own a Bookstore.” If I didn’t own a bookstore and someone suggested I read an alternate reality sci-fi slave narrative set in present day America written by a white man in the voice of a black man, I would have passed. But the person who pressed this one into my hands did so very convincingly, and as soon as I started to read it I was hooked. Underground Airlines is set in a present day America in which the Civil War was never fought, and four slave states (known as the “hard four”) are still intact. It’s Victor’s job to infiltrate the underground airlines, a series of helpers and hand-off points through which slaves escape; only Victor is black, and he’s an escaped slave himself, and despite his detached, world-weary voice of a noir detective, the whole business is a even more complicated than it seems.

There’s already been some grousing that Winters dared to write this book in the first place. He’s been accused of appropriating an experience that is not his own, to which I say, read the book. If you want to grouse you’re welcome to do so once you’ve finished. I’m a firm believer that imagination is a place without limits. People may fail miserably in how they inhabit someone else’s experience, but everyone is entitled to try, and I would go so far as to say everyone should try. Trying to experience the life of someone else (or reading about it) is an empathetic act, and Underground Airlines is an empathetic novel in the extreme. It’s also just a very good novel. It seems to me in light of the terrible violence in our country right now, imagining the experiences of other people, imaging alternative outcomes for our political system, is exactly what we should be doing. When Time magazine asked me to pick one book by an American author that I thought every American should read right now, I picked Underground Airlines. Book clubs: if you want to really talk about something that matters, this is your novel.

My last hard sell of summer is tough not because of its content but because of its form. The Dream Life of Astronauts is a collection of short stories, and some people wouldn’t read a short story if they were stuck in Oslo with nothing else to do. Set in Florida in the 1970s and ’80s in a world that revolves around the space program like the earth revolves around the sun, The Dream Life of Astronauts is one of the best books of short stories I’ve read in a long time (and I read a lot of short stories). So please, break out of your rut if you’re in one and give this collection a try. Patrick Ryan is a dear friend. You can read the interview we did together here. I would also ask you to please, if at all possible, come to his reading at Parnassus on Tuesday, July 19, at 6:30 p.m. I want to fill the store up and make a good impression.

My friend Pam Carter often reads for story time at 10:30 a.m. on Saturday mornings and she’s told me the story sessions these past few Saturdays have been packed. I think that’s because it’s simply too hot outside to play, or there are too many wild thunderstorms, or children are finally waking up to the fact that it’s more fun to read and be read to. Come by and visit us anytime. – Ann