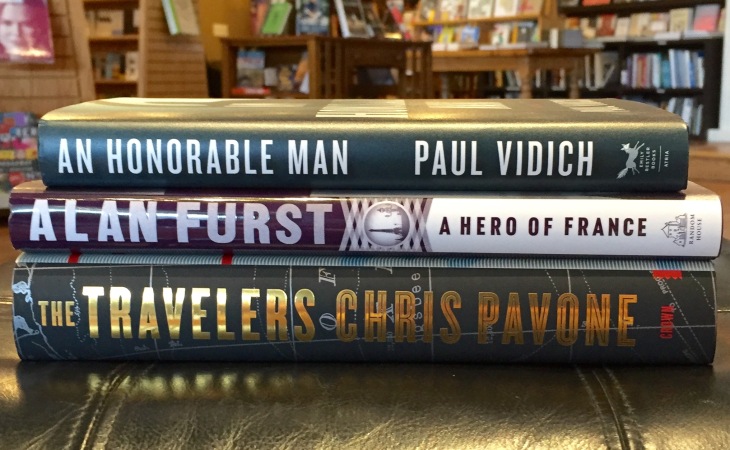 Those of us on staff here at Parnassus would like to assure you that our store manager, Andy Brennan, is probably not some kind of secret agent / CIA operative / undercover-something. We’re not absolutely positive he’s not a spy, mind you . . . but we’re pretty sure. We suspect the reason he knows so much about espionage has nothing to do with any sort of training as an elite double-crossing intelligencer, but instead with how many spy books he reads. (Still, if we were you, we wouldn’t tell Andy any secrets. Loose lips sink ships, you know?)

If you, too, love a good story of undercover suspense, take it from Andy, who may or may not be a spy but who is definitely a great bookseller and avid reader of spy-fiction. Here’s his latest report on this genre: 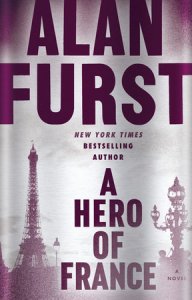 Alan Furst’s new book, A Hero of France — available as of today, May 31 — takes place in Nazi-occupied Paris in the early 1940s. Spies, blackmailers, informants, and brave citizens come together to form the Resistance and set about attempting to return downed RAF pilots to England via Spain. (From The New York Times: “Furst’s novels are immensely popular, perhaps because, despite their European setting, they can be read in the tradition of the American western.”)

You can also get Furst’s last book, Midnight in Europe, in paperback now. This time the Spanish Civil War is the setting as Furst places Parisian attorney Cristián Ferrar in the midst of an effort to buy weapons for the Republic of Spain. With his usual attention to detail, Furst illustrates the beginning of Europe’s plunge into Fascist darkness.

MEET ALAN FURST right here when he reads from and signs A Hero of France at Parnassus on Monday, June 6 at 6:30 p.m.!

I also highly recommend these recent and upcoming releases:

Phillip Kerr’s latest, The Other Side of Silence, finds recurring character Bernie Gunther retired and living on the French Riviera. Bernie is lured from his secluded life by novelist W. Somerset Maugham (who famously managed spies for the British secret service) and gets caught up in chase driven by blackmail.

In Chris Pavone’s The Travelers, we get an “everyman on the run” tale of international intrigue. Will Rhodes, a journalist for Travelers magazine, gets into trouble when he starts asking dangerous questions. Next thing you know, he’s fleeing for his life across Europe in this brainy, fast-paced thriller.

Paul Vidich’s debut novel, An Honorable Man, is set in 1950s Washington D.C. Using the backdrop of McCarthyism in the States and the death of Stalin in the Soviet Union, Vidich delivers a Cold War thriller that’s naturally inviting comparisons to LeCarré. This is spy fiction, so of course, no one can be trusted and nothing is as it seems, but even the most jaded readers will be caught off guard by the espionage and counter-espionage.

For something more contemporary, check out Nashville resident Brad Thor’s new book, Foreign Agent. This thriller deals with ISIS and the Islamic threat and weaves the worlds of counterterrorism into a story reminiscent of today’s headlines. (Available June 14)

If nonfiction’s your thing, take a look at Howard Blum’s The Last Goodnight. Using newly unclassified documents, Blum tells the true story of Betty Pack — the charming, brilliant World War II spy you’ve likely never heard of. Her heroism, intelligence, and cunning made her a vital resource to MI-6 and the OSS. Exhaustive research into the tumultuous life of the woman Time magazine called the “Mata Hari from Minnesota” provides Blum with the necessary elements to make this nonfiction narrative read like a suspense novel.

And last, a classic: If you haven’t read A Coffin for Dimitrios by Eric Ambler, now’s the time. Often cited as an influence on many writers of the spy genre (James Bond is seen reading it on the train in From Russia with Love), Ambler’s quintessential classic of espionage fiction excels at what the best spy books do: placing an ordinary person in extraordinary circumstances. Set in the 1930s under the gathering clouds of war, this novel explores politics and the darker side of human nature. Give it a read.

What are your favorite spy books? Tell us on Facebook, Twitter, or Instagram. Or leave it for Andy in a coded message in invisible ink under the third bench from the left in the park at dawn. Shhh.