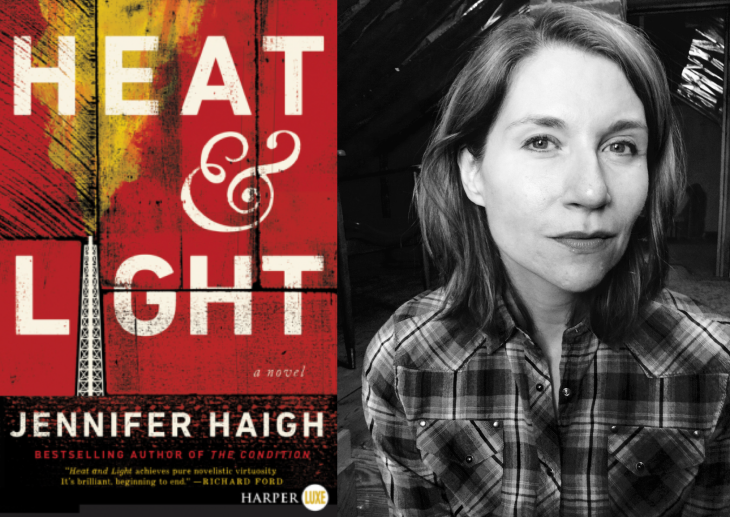 PEN/Hemingway Award-winning author Jennifer Haigh has a corgi named Ginger who looks like a meatloaf.

We’ll get to that in a moment, but first, we must talk about the magic she works in her brilliant new novel. Once again, Haigh tackles a contentious moral issue in a way that doesn’t feel like an “issues book” at all. Set in Bakerton, Pennsylvania, the coal country where Haigh grew up, Heat and Light shows what happens to the townspeople when a fracking company tempts them with a difficult choice: allow their land to be drilled for natural gas and receive a life-changing windfall, or protect the land and remain under financial strain. As Janet Maslin wrote in a review for The New York Times, each character is so richly developed that the novel feels almost more like “a deftly interwoven set of stories.”

Haigh’s previous novels — Faith, The Condition, Baker Towers, and Mrs. Kimble — won over critics and book clubs alike. Our booksellers who have read Heat and Light say it might just be her best work yet. Decide for yourself and join us this Thursday, May 12, at 6:30 p.m. in the newly expanded (!) store for a reading and book-signing. Meanwhile, Haigh tells our editor, Mary Laura Philpott, about her writing, her hometown, and her meatloaf-dog in this exclusive interview.

This story has somewhat personal origins for you, doesn’t it? 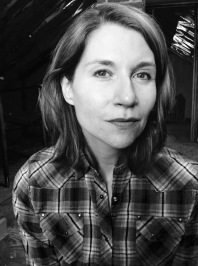 JH: I grew up in western Pennsylvania and still have family there, so the gas drilling phenomenon was on my radar from the very beginning. When I started writing Heat and Light, the drilling boom was going full force, and the national debate over fracking was raging. Josh Fox’s documentary Gasland had just come out, and environmental activists were campaigning for a moratorium on fracking in New York State — a measure that eventually passed. Among my peers — writer friends in Boston or New York — there was overwhelming consensus that fracking was an environmental catastrophe in the making. So when I went back to Pennsylvania for a visit and an old friend told me his parents had signed a gas lease, I was stunned. From his perspective, this was the opportunity of a lifetime — why would anybody say no? I was struck by the contrast between how people in Pennsylvania viewed fracking, and the attitude in New York State. The difference is that Pennsylvania has always been an energy state. The first oil well in the world was drilled there. The Three Mile Island nuclear disaster happened there. Coal companies dominated the economy for a hundred years. All that history has shaped the culture in profound ways, and I explore that in Heat and Light.

Tell us a bit about the research process for this book. It reminds me a bit of your previous work in that you’re taking on an issue of public relevance — this time it’s drilling; before, you’ve tackled issues such as child abuse in the Catholic church — and telling a story of how it affects a family personally. But the family story only works because you really make clear why the issue at hand matters to them. How did you come to understand the environmental and scientific aspects here so well?

JH: There was a real learning curve. Fracking is a complicated issue, and I asked a lot of dumb questions. More than most novels, Heat and Light is about the world of work, so I talked to a great many people about the work they do. I talked to dairy farmers, doctors, geologists, a prison guard, a minister, a county sheriff, environmental activists and a bunch of guys who work on drill rigs. I also talked to people who own land in Pennsylvania, some who’ve leased their mineral rights and some who haven’t. I didn’t talk to any politicians. I wanted to hear from people who are directly and personally affected by gas drilling, and to understand their reasons for doing as they do.

There’s a flip-side to everything and everyone in this book. The natural resource that could save the community financially might also devastate their health; no character is all-good or all-bad. How does this reflect your own worldview? Do you tend to see both sides of every story and every person?

JH: That’s my natural tendency. Writing fiction, like reading it, is an exercise in empathy. When I’m writing from a particular character’s point of view, I take her side completely, and see the world as she sees it. A week later, writing a different character, I might take the opposite view. I’m not interested in writing villains, and I never think of any character that way. Even people who do terrible things believe they have good reasons to do as they do.

When you look at your writing from book to book, what do you think has changed as you’ve been writing longer? What has stayed the same?

JH: The process changes every time. I approach each book as a unique engineering problem. Unlike a poem, which can succeed or fail entirely on aesthetic terms, a novel is a machine — a one-of- a-kind contraption I am designing, building, testing and re-testing, so that by the time it lands in a reader’s hands, all he has to do is turn the key and the machine will come to life and start moving on its own.

Heat and Light has a lot of moving parts. Writing it, I kept thinking about that old board game, Mousetrap — the game Wesley is playing in front of the television as they watch the news about Three Mile Island. The object of the game is to build a complicated mouse trap out of unlikely parts: a drainpipe, a bathtub, a seesaw and so on. As a kid I was obsessed with that game, that moment when you turn the crank and kick off the whole intricate chain reaction, which ends with the plastic cage sliding down the pole to trap the mouse.

When I’m writing a novel, I spend a year or two building my trap. Then I start looking for the pinch points, the spots where the ball loses momentum or rolls askew and fails to hit its mark. That’s what revision is to me, this infinitesimally precise reverse-engineering. If I weren’t a novelist, I might have been happy designing cars. Cars can beautiful, and the great ones are, but it’s a car, not a poem. When you turn the key in the ignition, you want the thing to work.

What’s the activity you enjoy that is the least like writing? Throwing a Frisbee to my corgi, Ginger. She’s a very low, sturdy dog — a meatloaf on two inch-legs – and her vertical leap never ceases to amaze me.

Fill in the blank:

If I could go back and tell my 25-year- old self something, it would be: Stop worrying about what you look like. Pretty is the least interesting thing a person can be.

Worst habit: Online Scrabble. I admit it: I have a problem.

Prize possession: The meatloaf (see above)

Favorite thing about the real-live bookstore experience: Talking with readers I’ve never met and hearing them refer to my characters by name. It’s delightfully weird to meet people who know my imaginary friends.

Books you’re excited about right now: I really liked Dana Spiotta’s new novel, Innocents and Others. I can’t wait to get my hands on the new Don DeLillo, Zero K — published on the same day as Heat and Light!