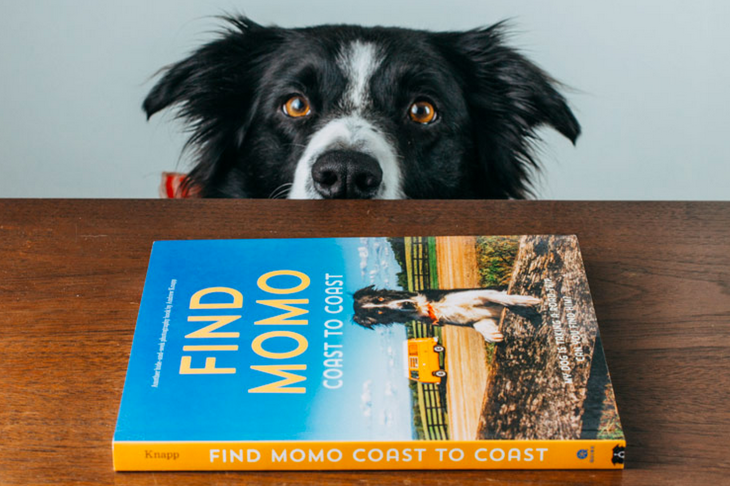 Meet Momo, a border collie with a talent for disappearing into his surroundings. Momo has made a bunch of friends on the Internet, because his pal (and owner) Andrew Knapp posts photos of the fun they have together playing hide and seek. Last year, Andrew and Momo published Find Momo, a bestselling book in which readers got to search for the hiding dog in beautiful photographs of the outdoors. Now Momo and Andrew are back with an adorable sequel. In Find Momo Coast to Coast, they climb back into their 1977 Volkswagen van and set off across the United States and Canada to look for more fascinating hiding places.

Andrew was kind enough to grant an interview to the shop dogs of Parnassus Books, who are intrigued by Momo’s adventures and looking forward to the Andrew & Momo event next Wednesday, May 27. Here’s their conversation:

Sparky: So, who’s really in charge? Andrew or Momo? Who decides when a day of photography is over and it’s time to go home?

Andrew: The photography usually happens spontaneously and quickly. We don’t really set time aside to do a shoot very often, and we let things happen organically. There’s value in both methods, but I prefer to let things happen as they need to. As for who’s in charge? I think that’s a question as old as dogs. Maybe we both think we’re winning, but he definitely gets away with a lot.

Gracie: What does Momo eat when traveling on book tour? Do you guys bring your own food supply?

Andrew: Yep! I’ve got a pretty good system. I have a really big sealed container that I put his kibble in. It’s Acana, but I do give him variety occasionally. I have a couple of bowls and usually he has food and always has water available. But Momo isn’t a food-driven dog. He’ll eat when he’s really hungry but otherwise isn’t swayed by food!

Eleanor Roosevelt: Andrew, has Momo ever hidden so well that even *you* couldn’t find him? What happened?

Andrew: Absolutely! It happens all the time actually, and it’s pretty much what inspired the idea! He’ll be waiting for me to throw him a stick or a toy, and he sits so still that I can’t spot him. I’ll play the game with him and it’s actually pretty fun IRL too.

Belle: What does Momo think about bookstores? Has Momo met any friendly shop animals in his travels?

Andrew: He’s learned that bookstores are commonly filled with people who are waiting for him and want to pet him and play with him, so ultimately he loves bookstores. He now also loves crowds of people in a way that he expects them to be gathered there for him.

Bear: Some of the things we like about living in Nashville are the temperate weather, the abundance of wildlife, and the widespread availability of barbecue. What are some of the best things about living in Sudbury, Canada?

Andrew: Sudbury’s got a strange charm to it. There was a re-greening effort decades ago after the mining industry basically destroyed all of the beautiful forests. People got together and physically poured lime into the soil to balance its PH levels (or something like that). They planted tons of trees. It’s an incredible story of community and people working to balance nature (even if it stems from the opposite). Right now, we’re in the latter phases of a cultural re-greening. There’s an openness in the air that gives you permission to try something new and exciting, and the community is receptive. Ultimately, it’s the community – the people. Though the forests are recovering nicely, and over 300 lakes are within city limits, nature’s allure is really a bonus feature after the incredible and tough people that reside there.

Opie: One time, a toddler customer tried to get on my back and ride me like a horse. What’s the strangest thing that has ever happened to Momo on book tour?

Andrew: I hate to go straight to this, but really it’s what comes to mind. In Boston (at the Brookline Booksmith), Momo fell in love with another dog. I could barely get through my presentation. It was hysterical and almost embarrassing. Dogs will be dogs.

And a bonus question from our Shop People:
How has this sequel experience been different from the process of creating your first book? Lessons learned? New opportunities?

Andrew: The second edition of any project will usually be easier, less daunting, and if you’re courageous enough it could be a better challenge. There’s no better way to get the kinks out of something than by full-heartedly doing it. We put a lot of work into the first book, and so we figured we should put even more into the second. I also learned that having an agent is really helpful if you don’t speak all the lingo and know all the ins-and-outs of book publishing.

Meet Momo and his buddy Andrew Knapp on Wednesday, May 27, at 6:30 p.m. right here at Parnassus Books. This event is FREE and open to the public!