Great news: We’ve planned your reading for the next week. Stop by sometime in the next few days and pick up a copy of Hausfrau by Jill Alexander Essbaum. (You know, the one NPR called “meticulous and resonant and daring” and which the Chicago Tribune praised for its “virtuosic intercutting of past and present.” ) Read it. Put it down. Stare out the window wishing you had someone to talk about it with. Then remember — ah, yes! — you do. Come to the Skillery next Friday evening, May 1, to meet Essbaum herself, get your book autographed, and discuss the dark psychological thriller you won’t be able to stop thinking about.

Quick plot summary: Anna Benz, an American woman nearing 40, lives in Zürich with Bruno, her Swiss husband, and their children. She has a life that looks picture-perfect on the outside, but on the inside, she’s feeling increasingly detached from the people around her. She tries psychoanalysis, German language classes, and a series of flings with ill-advised partners in her desperate attempts to find emotional peace. As one might expect, things get complicated, and a sense of anxious dread builds with each turned page. You may not like Anna or her choices, even as you devour the story and admire Essbaum’s craftsmanship. And that’s a question we’ll ask Essbaum when she’s here: Who says a character has to be likable to be unforgettable?

Meanwhile, get a feel for Hausfrau with this conversation between Essbaum and our editor, Mary Laura Philpott.

Anna is fixated on the idea of predestination. The question comes up repeatedly: is the future determined by fate or by our individual decisions? Obviously, authors have free will to take their stories wherever they want, but writers often say they’re surprised by things their characters do — that the plot takes a turn they didn’t see coming. It’s almost as though there are elements of the story that are predestined somehow. Did any of the characters in Hausfrau surprise you? 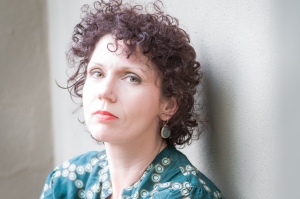 JAE: Absolutely. I wrote the novel beginning to end, meaning I didn’t plot the scenes out and go thru and write what I wanted to write when the spirit moved me. I forced myself to live Anna’s linear reality (yes, yes flashbacks and all—but I’ll argue those are relevant memories). I had a notion where the book was going. But I wanted to be open to something outside of my ideas. To live in a hyperdimensional universe maybe, where it was entirely possible that the novel knew better than me. In the last chapter, in fact (which I wrote in a 24 hour period between Good Friday services and Easter Vigil, 2011) a character walked into the narrative out of nowhere. He materialized from nothing as if a ghost grew bones. I totally didn’t see him coming! And he’s crucial. So I’m glad I was open! Too, I wrote start to end because I wanted to allow for the possibility for the book to end differently. It ended the way I thought it would—but it just as easily could have gone another way.

Anna’s inside rarely matches up with her outside — she’s often thinking one thing, while going through the opposite motions. Do you feel a disconnect between your own interior life and the outer world? Put more specifically: After you write a scene in which something brutal happens to your characters, does it feel strange to get up from your writing and go about your day, to interact with people who don’t know you’ve just inflicted great tragedy on someone (fictionally, of course)?

JAE: I’m a poet! I’m all sorts of disconnect, darlin’!

Sassy answer aside — yes, I do feel a disconnect. And not even in my writing life. In my religious life, my psychological life, my thought-thinky life. Which, in the end, is a partly why I’m moved to write, I think. It’s a way of sorting out the world, ordering inner files, shelving outer books. When I was in the middle of writing the book what I found was that it was difficult to come in and out of Anna’s world—but not for the reasons you lay out. It had more to do with trying to put myself in another country. I’d play German podcasts, pull up Google Earth on Street View, put all my Swiss photos on my digital frame and loop it 24/7. I would hole up in my office and pretty much stay there for several days at a time.

JAE: I wouldn’t call the writing of them difficult. I was forced into a corner where I needed to decide how frank I was going to be. I do not think they are gratuitous. I understand that some folks may find them distasteful. I would say the discomfort one feels reading them is key to our understanding of Anna — she can’t be enjoying herself (she’s not), she’s destroying herself (undeniably), and the worse off she gets, the more frenzied the sex becomes. I feel like I learned so much about her writing these. I learned that she is perhaps more vulnerable than passive. And I learned that she and Bruno are truly, actually connected.

Hausfrau is so beautifully constructed — from the pacing of the plot to the exacting word choice. I love it when poets write prose. Do you have a favorite novel by a fellow poet?

You lived in Zürich for a couple of years, correct? How much did your own ex-pat experience inform your characters here?

JAE: Yes, there’s a Venn Diagram where Anna and Jill overlap. No, no — I was not a cheating wife. Nor was (or am) I a mother. My husband was not Swiss. However I did live in a small town and I did find myself having to face long, empty afternoons with idle hands and my alienation chased me. My German was lousy and I was so damn lonesome, I think I was my own imaginary friend. I walked the woods, wandered the grocery store, rode the trains, cried on the bench. I know the landscape very well. And so I was able to put a woman who lives in extremes inside of it and see what happened. To play her sadness against the tension of the place she lives, the marriage she lives out, the lies she lives through.

Hausfrau makes some references to classics: Madame Bovary and Anna Karenina among them. My friend Sissy (a bookseller at Parnassus who passed me the Hausfrau ARC after she finished it) thought it brought to mind the novels of Edith Wharton, and I agree with that, too. Those comparisons are useful for giving someone a quick idea of what the book is like, but do you ever think it does a book a disservice to describe it as a “modern [fill in the blank]”?

JAE: I had Emma Bovary in mind, chiefly. But note — this is not a retelling. I’d like to think that in its own way Hausfrau becomes its own book. The Awakening was heavy on my heart as well.

But I recently remembered that one of the first books I read when I moved to Switzerland was Josephine Hart’s Damage. Have you read it?

JAE: It’s about some relationships that are destroyed because of an affair and then tragedy happens. But it’s the patriarch of the novel who is the … well, the Anna-ish character. Interestingly enough, I picked the novel up again recently (it’s been nine years since I’ve read it) and the woman that the main character Stephen has an affair with is named Anna. Ha! I’m so transparent! Except it was entirely subconsciously done! What would Anna’s analyst, Doktor Messerli, say?

Speaking of other books: Have you read Jenny Offill’s Dept. of Speculation yet? It came to mind when I read Hausfrau, partly because it deals in similar themes of depression, marriage, fidelity, and mortality, but also because in some ways it seems like an inverse situation: You typically write poetry, but Hausfrau is prose in novel form. Jenny wrote what was sold as a “novel” but which looks very much like a poem on the page.

Do you read reviews of your books? And if so, how do they affect you?

​JAE: I know my limits. And they are low. I also do not use Web MD. There’s little good that reviews can do me but desperately hurt my feelings. If a review is good my husband will tell me.​ I used to read them. But — yeah. You know?

JAE: ​I discovered Smencils (smelly pencils! amazing name!) at BookPeople in Austin, and I’m totally 12 years old on the inside so I confess: I love the non-book paraphernalia you can sometimes find. I also love the weirdly specific magazines I can buy. And the people-watching! And the staff recommendations. And, most definitely, the staff! ​

JAE: I read two advance copies that you best get ready to love if you don’t already: Mark Haskell Smith’s wonderful exploration of nudism in America, Naked at Lunch, and Jillian Lauren’s new memoir, Everything You Ever Wanted. Also, Cate Dicharry’s debut novel, The Fine Art of Fucking Up. Brilliant.

I’ll check those out. Thank you! See you soon.

Thank you so much for such thoughtful questions!

Meet Jill Alexander Essbaum on Friday, May 1, 7 p.m. at The Skillery for a reading and signing of Hausfrau, presented in partnership with The Porch Writers Collective.