Gayle Forman has been writing for a long time, but it’s only recently that her name has jumped up into the instantly-recognizable category. The film adaptation of her bestselling novel, If I Stay, hit theaters last year and sent a new flock of fans into bookstores looking to find all the Forman books they could get their hands on. Good news for those folks: Her engrossing new novel, I Was Here, comes out this month.

Forman joins us on January 30, along with fellow YA authors Ruta Sepetys, Courtney C. Stevens, and David Arnold, for a reading, signing, and celebration of her latest book. In anticipation of that event, she spoke with our MUSING editor, Mary Laura Philpott.

We’re so excited that you’re going to be in Nashville the very week that your new book, I Was Here, is released. What can you tell fans of your previous books about what to expect with this one? 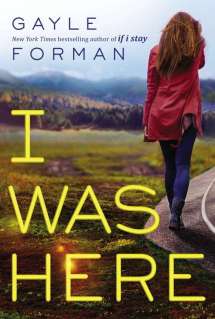 I wrote I Was Here several years ago, in a little vacuum, a little bubble, which is similar to how I wrote If I Stay, which of course I wrote not knowing if anyone would even publish it. I wrote it while I was writing two other books concurrently under a deadline — which I’ll never do again — I didn’t like doing that. I called this “my affair book” because I would sneak off and work on it. It felt like it was illicit, like it was something I wasn’t supposed to be doing.

It returns to the Pacific Northwest, but it’s a very different book. It opens with some really dark events, a suicide. But I always say it’s no more about suicide than If I Stay was about car accidents. What’s new for me is that it’s a mystery.

I Was Here starts out in some dark territory. Where did that story come from?

Years ago, when I was doing magazine work, one of my last big pieces was for Cosmopolitan. It was an oral history of three suicides, three young women. I talked to their families and friends, and I kept having this bizarre cognitive dissonance, especially with the story of this one girl, Suzy Gonzales. The conversation was really upbeat and interesting — it was like I was interviewing people because I was profiling a 19-year-old who had directed her first film or was the lead singer in a band or something. She was obviously so charismatic and smart. She had that spark. She was someone who knew how to get things done. And I kept having to bring myself back to, oh no, I’m not interviewing people because of that; I’m interviewing people because she killed herself. The other layer of her story was that she clearly had been depressed, and she’d had been involved in a suicide support group that supported her desire to end her own life. At the time, I remember thinking, I’d love to do something more with this story, maybe even suggest it to a friend of mine who’s a journalist to write a nonfiction story about it. But that idea didn’t go anywhere, and then I sold If I Stay and things started moving with my fiction career.

I never forgot about Suzy. When I was in the middle of working on Just One Day and Just One Year, I started thinking about Suzy again — not so much Suzy herself but about her suicide note, which she sent as a time-delayed email. I started thinking about what it would be like to get that email, to be so shocked. And that’s where Cody came from — when I started imagining, OK, there’s this girl, and her friend goes away, and she has to go back and try to figure out everything. The story started there.

You seem to have a good feel for what readers like.

I’m writing for what I like. I am my own barometer. I throw away a lot of projects, because I have that little voice in my head that’s like, “Nope, it’s not good enough.” I’m really writing for myself. I guess that means that I am 16 years old inside.

Why do you think you’re drawn to writing for a young audience?

I hear a lot of young adult authors say it’s great to write teenagers because if you had a crummy adolescence, you get to go back and change it. But I didn’t have a crummy adolescence. For me, it was ages 8-11 that were miserable, but the time I hit 12 I started to figure things out. I don’t feel like I’m writing about “high school issues.” I’m writing about the stuff that’s on my mind now. It’s just that young people seem to be the most interesting vehicles to tell the stories.

As an executive producer on the film adaption of If I Stay, you had a significant consulting role. Was there any part of you that was reluctant or worried about sharing the characters and story that came out of your head and allowing other people to interpret them?

Yes, absolutely. But by the time I came aboard as executive producer, it was with MGM and RJ Cutler, whom I’d met, and Allison Greenspan, whom I’d gotten to know, and I had confidence that they’d make the kind of film I wanted to have made. Once I met them and knew them, I had a sense that we all wanted the same goal, and I could be a valuable interpreter of the characters and how fans saw them. That’s one of the reasons I did want to do it, because I knew there wouldn’t be a battle. They weren’t going to take the baby and turn it into something unknowable.

Any more films in the works from your books?

Just One Day and Just One Year. We’re right at the beginning. They’ve just been adapted.

Did the release of the If I Stay movie change things for you at all professionally?

I guess it changed things on paper, because it has made the book so much more known. That’s fantastic, but it’s also a bit like winning the lottery. It’s the same book that’s been out since 2009 — not one word has changed. But all of a sudden there’s a movie campaign, so more people get the book. I feel grateful, but it’ll be interesting to see when I go out on this tour how much has changed for me as an author. I still get stomachaches when I go into bookstores.

Yes! It’s crazy-making. I cannot handle it. I go into my lovely little indie store, Word, in Brooklyn. I know they carry my books, because I go there to sign them. I don’t have to worry about, “Is my book there or not there? Do they carry it?”

But I love going into Word, because it’s the ultimate hand-sell. Every time I go there, there’s this bookseller named Molly, and I say, “Molly, what should I be reading?” And she gives me the best book recommendations. Sometimes other writers are there. I went in recently and Jami Attenberg was there, and she said, “Have you read Meghan Daum’s essays?” So I’m reading those now and loving them. And I just finished All the Light We Cannot See — wow. What the hell do you read after that? All the Birds, Singing, one of my favorite books from last year, came from Molly. That’s my favorite thing. I love having a bookseller who knows what I should be reading. That’s why you go to your indie. And now I have all these new books to read.

What else is in that stack?

I’ve got A.S. King’s Glory O’Brien’s History of the Future, which is a YA novel; I’ve got an ARC of Sarah Dessen’s Saint Anything; Emily Gould’s book, Friendship; another ARC, More Happy Than Not by Adam Silvera; and Station Eleven; and that’s probably about all I’ll get through on this trip.

Are you at work on another book now?

I’m on two projects at once, which is crazy, but it seems to work. They’re completely different. It’s been challenging to find the time to work. Promotional stuff for If I Stay just sort of rolled right into the promotional stuff for I Was Here. And then there was the particular New York experience of trying to figure out where my child will go to middle school next year. It’s like applying to college.

How do you work on two different projects at once like that?

I don’t know! I don’t know if I’ll be able to keep it up. I start on one thing, and then another thing starts pecking away at me. I just work on multiple things until something wins the endurance contest.

By the way, we haven’t discussed yet how Ann Patchett is my long-lost sister, have we?

I am her biggest fan. Since long before Bel Canto. Since The Magician’s Assistant, I think. And when I read her book of essays, I knew we were soul sisters for two reasons: First, we both got started at Seventeen magazine. And we both waited tables at TGI Fridays. When I read about the Fridays thing, I laughed and laughed… I had a button that said, “Ask me about a free car wash.” We had to wear all these buttons. It was awful.

Seriously, whenever anyone asks me at an event, “Do you have advice for writers?” I say, “Yes. Get a hold of the essay by Ann Patchett called ‘The Getaway Car.’ It’s everything you need to know.”

[Ed. note: We did not pay Forman to say that. However, she said it so nicely that if she weren’t already at work on another book, we’d consider hiring her to say things in the future.]

Meet Gayle Forman when she comes to read and sign her new book, I Was Here, on Friday, 1/30, 6:30 p.m. at Parnassus Books. Forman will be joined by friends and fellow YA authors Ruta Sepetys, Courtney Stevens, and David Arnold. Come make an evening of it!