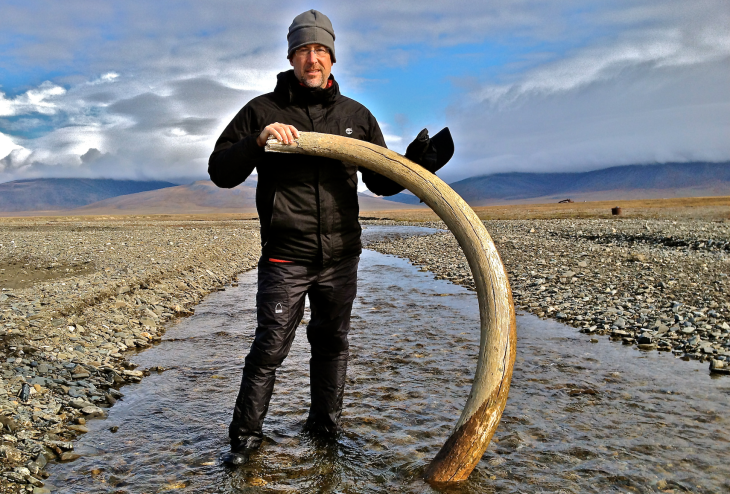 To say Tennessee native Hampton Sides is an outdoor enthusiast doesn’t quite cut it. Let’s put it this way: He’s the kind of guy whose personal photo album includes a shot of him holding a wooly mammoth tusk on Wrangel Island, the most remote region of Siberia. (See above for proof.) Sides, an editor at Outside magazine and frequent contributor to National Geographic, showcases that passion for the natural world and talent for writing about all its wonders and horrors in his fifth book, In the Kingdom of Ice: The Grand and Terrible Polar Voyage of the USS Jeannette. 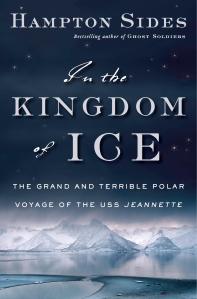 In the Kingdom of Ice recounts the three-year-long expedition of the USS Jeannette, which began in 1879 when Captain George De Long and his crew set out to explore the North Pole. Two years into their journey, the ship became hopelessly locked in ice. The men were forced to abandon their vessel and battle the most extreme weather imaginable as they journeyed on foot across ice and tundra to survive. It’s a true story, woven together from actual accounts, but it reads like a thriller. That’s no small feat, as Michael Ray Taylor noted in his review of the book for Chapter16:

“History” and “suspense” might seem to be opposite terms. How can a part of the historical record—a story involving verifiable events, lived by well-documented people—ever be suspenseful, keeping readers up far into the night, waiting to see who lives and who dies? Successful suspense writers invent believable heroes, villains, and action, but the scrupulous historian is allowed no invention beyond good sentences, even when source material is in short supply. . . . Hampton Sides hits the mark squarely.

One of the things In the Kingdom of Ice does so well is to recreate the exploratory spirit of the late 1880s. The nation — indeed, the world — was obsessed with discovering what lay at the North Pole of our planet. News reports fervently followed the USS Jeannette’s progress; everyone knew the story. It brings to mind the drive and enthusiasm behind the space program in the middle of the last century — that desire to know and conquer the as-yet unknowable. We asked Sides to think about how that compares to the world today, a time when there’s not much Earth left to discover and NASA’s funding for space exploration keeps shrinking.

HS: I don’t think we’ve ever lost the exploration bug. It’s just that the nature of “the frontier” has changed. Instead of heading north to discover what’s at the top of the world, we’re diving into sub-atomic particles, into neuro-science, into the human genome. It’s not as immediately sexy or understandable for the average person, but the bug is still infecting us! Yes, deep oceanic exploration is also hot, now that submarine technology has so vastly improved, and there’s a lot of excitement about the forthcoming expedition (2020) to Europa, the moon of Jupiter that appears likely to have the best conditions for supporting life.

What’s different, I think, about the current environment of exploration from the one I write about in In the Kingdom of Ice, is that nowadays, people are far less willing to put themselves in situations that are virtually guaranteed to produce hardship, danger, and death. The men on the Jeannette expedition knew there was every likelihood they would die a horrible death, and yet still they willingly put themselves in harm’s way. Thousands of volunteers signed up from all over the country. That was a very different time, and a very different generation, with radically different ideas about heroism and personal suffering.

Hear more from Sides when he visits Nashville to discuss and sign In the Kingdom of Ice on August 12 at 6:15. The event will take place in the Dead Poets Society Room at Montgomery Bell Academy.

Members of the Parnassus First Editions Club will receive an autographed first edition of In the Kingdom of Ice. The First Editions Club is a fantastic way to build your personal library, discover new books from established and emerging authors, and get fun monthly deliveries that last much longer than fruit-of-the-month. Memberships also make great gifts. Click to learn more . . .