Don’t you love eavesdropping? We do. That’s why we connected authors Daniel Wallace and Grant Ginder and invited them to chat with each other over email and let us follow along. After all, who better to interview the writers of two fun summer reads — Extraordinary Adventures and The People We Hate at the Wedding — than the writers themselves? (We also love getting other people to do our work for us.)

But before we get into their conversation, let us introduce you: Extraordinary Adventures is Daniel Wallace’s sixth novel. His first, as you might recall, was Big Fish — the bestseller/bookseller-favorite that later became a movie and a Broadway musical. Fortunately for Wallace (and readers everywhere), his book tour coincides with summer break at the University of North Carolina, where he teaches creative writing. His new book centers around Edsel Bronfman, a guy with a quiet, uninteresting life . . . until he wins a free couples-only vacation. With 79 days to find a partner and claim his trip, Edsel begins to look at everyone and everything differently. Novelist Wiley Cash (A Land More Kind Than Home) calls the story, “soulful, funny, wise, and surprisingly sexy.”

Expect to see The People We Hate at the Wedding, Grant Ginder’s third novel, sticking out of pool bags all summer. (Our events director, Niki, also noted how adorably perfect the cover is for wedding season. Hellooo, bridesmaid’s gift.) It’s a deliciously catty and unexpectedly heartwarming tale of what happens when adult siblings and various estranged parents and step-parents gather in England for a family wedding and lots of eye-rolling. Jennifer Close, author of The Hopefuls, dubbed it “family dysfunction at its best.” Ginder is also a writing instructor at New York University.

Now that we’re all acquainted, please enjoy an email interview between these two writers. And come have your own conversation with each of them when they visit Nashville! Daniel Wallace will be here June 7, Grant Ginder on June 29.

DW: So Grant, my first question is: How are you? Your pub date is one week after mine. I hope you’re looking forward to it.

GG: Hello! I’m doing well! Busy with wrapping up the semester, and all that entails. The book stuff, meanwhile, is starting to get real. Last night I had a dream where Barbara Bush (?????) told me she didn’t like it. So, there’s that. How’s all of that going for you? Exciting, I hope!

DW: I’m doing well! And don’t be ridiculous: Barbara Bush is going to love your book.

Okay. So. A question: The People We Hate at the Wedding is a hilarious book that isn’t frivolous at all; as we creative writing professors say, it has gravitas (one of the only Latin words I know). How do you do that?

GG: I think it was Erma Bombeck who said, “There’s a thin line between laughter and pain” — or something to that effect. In any event, I try to keep this in mind while I’m writing. To an outside observer, my characters’ insecurities might seem hilarious — absurd, even — but to the characters themselves, I imagine those tics to be very, very real. I suppose that’s where the weight, or the gravitas, comes in. We’ve all got anxieties — and while we might joke about them outwardly, they’re also the things that keep us up at night.

Now, my turn: Something that struck me about Edsel in Extraordinary Adventures is that his naïveté is punctuated with these glimpses of profound and moving wisdom. How do you flesh out that dynamic in a way that feels authentic, instead of writerly or put-on?

DW: Erma Bombeck does not get quoted enough. I also like this one: “Never go to a doctor whose houseplants have died.”

To your question: Bronfman is naive in so many ways, and he doesn’t have a lot of friends, and spends much of his time alone before the novel begins. But it’s this innocence and incapacity to live that allows him to see the world in a new and different light. I think of Bronfman as an artist who has yet to find his art.

So Grant, TPWHATW (an acronym that just rolls off the tongue, btw) is a well-populated novel, but each character has her own story, and all of the stories are part of the same larger drama: you’re like a juggler who keeps adding balls to his routine, until there are an impossible number of them in the air at the same time. Is this something you had to sketch out, to outline, or did you just sit down and see what happened?

GG: I love that — “an artist who has yet to find his art.” Sort of like an Erma Bombeck who has yet to discover her inner At Wit’s End. (Side note: I apologize for the copious Bombeck references — I went through a weird phase where I’d stay up late, drinking whiskey and reading her old columns.)

Regarding an outline for TPWHATW, I actually didn’t have one, which was terrifying for me, though also oddly freeing. It gave me room, I think, to imagine the separate arcs of each of these characters, without the constraints of some pre-determined plot. The image I kept coming back to as I was writing was, oddly, a set of runaway trains — a bunch of locomotives with busted brakes that, inevitably, would collide.

Okay, now back to you: I’m fascinated by the way you deal with the whole notion of myth in your work. Big Fish, obviously, introduced readers to some outrageous and unforgettable tall tales. Sure, Bronfman isn’t dealing with the wild fictions of Edward Bloom, but his adventures are nonetheless, well, extraordinary (sorry, I had to), and he certainly goes on an odyssey of his own. How do you manage to create stories that are at once spectacular and familiar?

DW: I’ve never outlined anything in my life, including my life. It’s scarier, but more fun when (if) things work out. Working without a net brings more energy to the plot, to the prose itself. That’s really evident in your novel.

Myth works for me, as a storyteller, in that it marries the quotidian with the magnificent, the incredible, the (okay, here I go, forgive me if you can) extraordinary. Bronfman is exceedingly ordinary, superficially; like the rest of us, beneath the skin he’s a mass of thoughts and feelings and desires, some of them contradictory. Though the series of events that lead to his final self-discoveries seem to be tempting credibility, I believe each of them, all of them, could and probably have happened to someone. Just not to the same someone.

(Could I be more long-winded? Let’s see.)

DW: I forgot to ask a question because all I think about is myself. 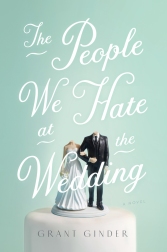 DW: Okay, I have a question for you, Grant Ginder.

This is your third novel. First and second books have their own specific identities, but the third book really doesn’t. Or does it? Is it just the book that comes between the second and the fourth, or does it mean something more in the story of your writing career? As a writer who is clearly in it for the long haul, where in your professional psyche does this book reside?

GG: In a lot of ways, this is the most personal book that I’ve written. With my first novel, I didn’t really know what I was doing (side note: I still don’t really know what I’m doing). With the second one, I think I was focused on plot, on what makes a compelling story. The People We Hate at the Wedding, though, takes a turn inward; I’m writing about the stuff that’s right in front of my nose. Maybe it’s because I’m older and, paradoxically, I feel like I understand people less than I ever have before. This book is an attempt to figure them out, to unpack the complications of messy stuff like jealousy, and resentment, and love. I’ve got a feeling I’ll be working in this vein for a long time.

So, Daniel. You run the creative writing program at UNC Chapel Hill (Go Heels!), where folks are lucky enough to have you as a professor. How do you see the act of teaching affecting your own work? Do you follow the advice you give your students, or are you constantly breaking your own rules?

DW: If I were writing a book of Zen koans I would say, The more I teach them the more I learn myself. But I’m not writing a book of Zen koans, so I will put it this way: I’m the most selfish person you’ll ever meet. When I read my students’s work I read it the same way I would read my own, discovering, invariably, that I make the same mistakes they do. When I ruthlessly castigate a student (and that’s how I teach, through ruthless castigation) for writing a sentence that is much too long, a sentence that could, in fact, be three sentences, that meanders like a dizzy kitten — I think you know what I mean by a dizzy kitten — through a dark and swampy moor, a sentence so long that by the end of it you really don’t know anymore where it started, I can see instances where I have made the same error, after which I ruthlessly castigate myself, and revise.

I’ve really enjoyed this back and forth. To end it I’m going to ask you the question writers like least in all the world: what are you working on now? And tell me in one word.

Here is my word: birds.

GG: This answer provides relief on so many levels. For starters, I’m glad that you’re as selfish as I am when it comes to teaching, and writing. More importantly, though, I’m thrilled to know that someone else writes sentences that meander like drunk (and maybe stoned) kittens.

And, to answer your question: Ouzo.

This has been a blast!

Meet Daniel Wallace and Grant Ginder when they visit Parnassus Books in June! Both events are open to the public and free to attend.