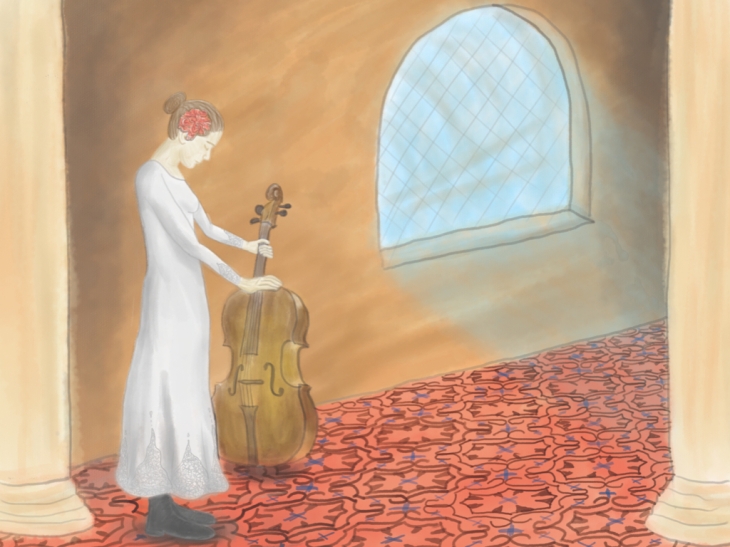 It’s always a thrill to celebrate the launch of a first novel — knowing what a huge accomplishment it is for the writer and how much work and time and hope have gone into it. It’s all the more exciting when the author is a local friend of the store. So we’re delighted to host Kim Teter as she presents her young adult novel, Isabella’s Libretto, on Wednesday.

An article in The Nashville Scene summed up the story well:

For the past several years, futuristic dystopian society has been a popular topic among much YA fiction, but in her debut novel, Franklin, Tenn.-based writer Kim Teter turns the time machine back to the early 18th century. Isabella’s Libretto, set in an orphanage in Venice, features a 15-year-old protagonist torn between a life as a musician (under the instruction of Vivaldi, no less) or as a “lady” via marriage into a wealthy family.

Teter worked at Borders back when it was open in Nashville, so she knows the book business from the inside out. We talked to her to find out what it’s like being on the author’s side of things now.

What was your favorite part about working as a bookseller? How did your experiences there help you as you wrote Isabella’s Libretto?

KT: The smell of real books — that was one of my favorite parts of walking into the Borders in Brentwood when I worked there! Books are a powerful common denominator, and I loved talking books with our customers and the other booksellers, one of whom was Parnassus’ own Andy Brennan, bibliophile extraordinaire! Recommendations for a good read were always flying back and forth, and the regular customers shared with us just as much as we shared with them. There’s a vibrant energy in a bookstore!

I worked primarily in the children’s and young adult section, and it was a thrill to open a box and see the new titles that had come in. What a wonderful “obligation” it was to read the synopses on the jacket covers so that I could familiarize myself with them. Working in a bookstore inspired me with a delicious sense of optimism — I would read a dust jacket and think, “I can do this. I can write a good story too!”

Tell us a bit about the process and timeline of writing this novel, which is your first. How long has it been in the works?

KT: I am so busted by the question of “how long” because I worked on this book a LONG time. The idea for Isabella’s story was born over 10 years ago when I lived in Charlotte, NC. I was taking a music appreciation course and I was simply stunned one day when our instructor told us that Antonio Vivaldi had directed a famous orchestra that was composed of girls who had been orphaned or abandoned. I would have thought that girls in that situation would have been throwaways of society in the 18th century, but instead, these young musicians were given the best training available and performed for royalty. I was eager to learn more, so I researched and read and visited Venice, and a tale started spinning in my head. Then I developed a detailed outline about a few girls I imagined living there. I knew where my story would start, in general where it would go, and how it would end.

When I was a few chapters into the book, we moved to Nashville for my husband’s job. I took my human baby 2,000 miles away to college and came home to the news that my dog had cancer. I had empty nest syndrome to the nth degree, and the last place I wanted to be was sitting by myself in front of a computer. I got out and met people and put down roots in Nashville and my dog recovered from cancer — and then Isabella called me back. I was committed to finishing her story, so I enrolled in The Writer’s Loft at MTSU and then joined the Society of Children’s Book Writers and Illustrators. I have to say that making the connection with other writers was the single most important step I took in this journey! The knowledge that I learned from other writers profoundly influenced Isabella’s path to completion. My story changed. It started in a different place, went a different route, and concluded with a totally different ending. I believe that the book I have in front of me now is a much, much better novel than one I could have written 10 years ago.

Your book is set in the early 1700s. What will today’s YA readers find relatable about it? Was it challenging to write historical fiction for contemporary audiences?

KT: Isabella, my protagonist, was born in 1700, but I think that her concerns and desires transcend time and place. My 14-year-old niece is a competitive dancer, and I see in her the same kind of passion and focus that drive Isabella. Whether it’s music or dance, athletics or academics, I know that many YA readers yearn to excel at something and to be recognized for their achievements. Isabella’s other concerns — fighting with her best friend, being punished for breaking the rules, wanting to be part of a group, figuring out who she wants to be — are concerns that worry teenagers today, and I suspect will worry teenagers in another hundred years.

As far as the challenge of writing for contemporary audiences, I would have to say that my focus was on writing a timeless story that would pull a reader away from contemporary concerns into the 18th-century world of the Ospedale della Pieta.  I loved immersing myself in the world of Vivaldi’s musicians, and I hope my readers will share my fascination for that slice of history.

"Once black motorists crossed into New Mexico, there were only three cities over a three-hundred-fifty-mile stretch that had Green Book accommodations. Once they reached Albuquerque, only six out of the more than one hundred hotels that lined Central Avenue would rent a room to them. Folks who didn’t have a Green Book would have had no idea which six motels those were.” . Come see Candacy Taylor, author of Overground Railroad, at Parnassus on Monday, Feb. 17 at 6:30! . #books #author #events #overgroundrailroad #greenbook #blackhistory #bookstagram #indiebookstore #nashville